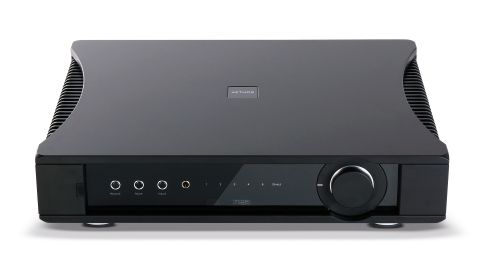 The Rega Aethos delivers an exceptional combination of insight, dynamics and rhythmic precision to produce a class leading sound

It’s fair to say that we’re big fans of Rega’s integrated amplifiers. Between the Brio (£599), Elex-R (£949) and Elicit-R (£1679), the company has picked up more five-star verdicts, Group Test wins and Awards from us than we care to remember.

But Rega’s products are rarely revolutionary, so it comes as no surprise to find that the Aethos leans heavily on the electronic principles already established in the existing line-up. Think of this integrated as an Elicit-R turned up to 11 and you’re close to the mark.

The engineers haven’t just posted-in the design though. There’s a lot of fresh work under that brooding exterior.

The power amp’s circuit is designed to offer the benefits of Class A operation without the usual drawbacks in terms of heat and power consumption.

The preamp section prioritises signal integrity and consistent channel balance and features higher-grade parts than used in the company’s other (cheaper) products.

The Aethos falls short of most obvious rivals in terms of its features, but if you’re happy with line-level analogue connectivity, there’s more than enough here.

It has five line-level inputs, a preamp out, a direct input into the power amp section that bypasses the volume control and that rare thing, a tape loop. Let’s not forget about the front panel mounted 6.3mm headphone output either.

Those looking for digital inputs, wireless in the form of Bluetooth connectivity or even a phono stage will need to look elsewhere or add extra boxes. Given Rega’s record player heritage, some may find the lack of a phono stage surprising.

However, the company feels that including a phono input would compromise the rest of the design and such sensitive circuits are better served by being outboard at this level. It’s a fair argument.

The Aethos’s build quality is impressive. The chunky styling of the new casework may not be to all tastes but it certainly feels rock solid and inspires confidence. The controls are simple enough with smooth-acting buttons for choosing the inputs for listening and recording.

There are a few minor issues though. This design forces the user to toggle through the inputs rather than select them directly. This can be a bit of a pain if you change sources regularly, with any changes taking multiple button presses rather than just one. It doesn’t help that the lighting used to indicate the source selected is too dim to see clearly in a bright room.

Lastly, the volume control is rather enthusiastic when responding to commands from the remote, so it’s hard to make subtle volume adjustments. However, these things are minor irritations at most.

A more practical consideration is that this amplifier still runs pretty warm despite the claims made for the power amplification circuitry’s efficiency. Make sure you leave enough space around the Aethos to ensure adequate ventilation.

Our initial impressions of the Aethos’s sound were disappointing. Despite being given days to stabilise, it wasn’t as dynamically expressive as we expected and didn’t convey rhythms with enough verve. We asked for another sample and we’re glad we did.

The second Aethos sample proves a notable improvement in both respects. It turns out that the cables for one of the channels had been disturbed (possibly during transit) with the result that distortion had increased on that channel. The second sample has no such issue and is very much Rega on top form. Given Rega’s track record, we would hope and expect any issues to be sorted quickly.

The Aethos retains all the verve of the company’s established affordable integrateds, but adds a huge dose of extra clarity, precision and muscle to the recipe.

Dvorak’s New World Symphony is a stirring piece of music and this Rega delivers it with all the authority we would expect. The Aethos sounds unstressed even when pushed to high levels and uncovers an impressive amount of detail. All that information is tightly knit in a cohesive and convincing way, so that all our attention is focused on the music, rather than the mechanics of hi-fi reproduction. The overall presentation is impressively clean and forthright.

Tonally, this integrated veers slightly towards the lean side of neutral, but in no way sounds thin or undernourished. We suggest that it’s best to avoid systems that already edge towards brightness or aggression. This is a revealing amplifier that doesn’t go out of its way to hide the shortcomings of its partnering source or speakers. Match with a bit a care, and let’s face it, this is something you should do at this level, and there won’t be any issues.

The stereo imaging is precise and nicely layered, though there are rivals such as Roksan’s Blak that sound a little more expansive. Either way, there remains little to complain about when it comes to image stability or scale.

We play Laurie Anderson’s My Right Eye and the Rega’s enthusiasm with rhythms and its impressive punch come to the fore. Following the song’s complex rhythmic patterns is a pleasure through the Aethos, and the amplifier makes easy work of communicating the song’s claustrophobic intensity. Anderson’s voice comes through with clarity and nuance and there’s never any doubt about her intent or what she wants you to feel.

We try the Rega’s headphone output and are pleased with what we hear. The results are consistent whether we use our Beyerdynamic T1s or Grado’s RS1s and retain the clarity and punch we enjoy through the speaker outputs. This headphone circuit certainly doesn’t sound like an afterthought in the manner that some do.

Along with the Roksan Blak, the obvious rival is Naim’s Supernait 3. This is our current favourite at this level and is a formidable performer. Though it costs around £500 more, the Naim also includes a good quality moving magnet phono stage. There’s little to separate the two amplifiers when it comes to build, each feeling impressively solid and nicely finished.

There are differences when it comes to sound, though. The Naim sounds even more muscular and has a slightly fuller tonal balance, which probably makes it less fussy to partner. The Rega counters with greater clarity and dynamic fluidity. It arguably delivers rhythms and dynamics with even more skill too. That’s some feat considering the Supernait 3’s acknowledged abilities in these areas.

If you’re in the market we would recommend listening to both, and the choice is likely to come down to system matching and taste as much as anything else. That £500 saving helps the Rega’s case though. Either way, the Aethos is a terrific proposition and has to be heard.