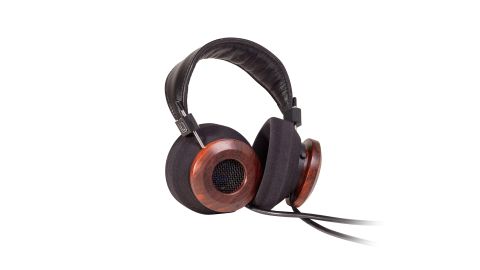 Once you find a quiet room for listening, these Grados are more than capable of turning in a magnificently musical and informative performance

The Grado GS3000es need a listening room. That sounds like an odd thing to say about a pair of headphones, but get a pair and that’s exactly what you’ll wish for.

The GS3000es are an open-backed design. They not only leak out lots of sound but they let in everything too. Voices, traffic noises, kettles boiling, you name it – all will intrude on your listening experience to varying degrees.

During testing, it isn’t long before we see the look of disapproval from anyone sitting near us, once the high-frequency 'tiss-tiss' emanating from the rear of the headphones starts getting on their nerves.

The solution? Go to a quiet space, away from anyone likely to disturb or be disturbed. A dedicated listening room, for instance.

Grado claims these are the finest wooden-cased headphones it has ever made. That’s some statement considering the standards set by previous gems such as the legendary RS1 and current GS1000e models.

The appearance of the GS3000es follows established brand traits. The headband is a flat, minimally padded, leather-covered structure that shouldn’t be as comfortable as it is, and those massively oversized foam earpads look as odd as ever.

But, perhaps surprisingly, the GS3000es are comfortable, and at around 300g on our scales, they’re pretty light for high-end headphones. Certainly, these cans are a world away from the unbalanced, overly heavy feel of siblings such as the metal cased PS1000es (£1899).

While an open-backed design has clear practical issues, there’s no denying that it enjoys pretty fundamental sonic advantages too. The housing on a closed-back headphone, no matter how extravagantly engineered, will always have some kind of degrading effect on the sound produced.

This can be through enclosure resonances or distortions caused by the driver’s rearward radiation affecting its forward output. These Grados simply get around these issues. There are still going to be some resonances in the housing, but these are a lot less troublesome than they would be in a closed-design.

The open design also means that our ears don’t heat up over time. Long listening sessions pass without comfort becoming an issue, which isn’t something that can be said for much of the premium-priced opposition.

While Grado uses mahogany, or a combination of it and maple, for the housings of its established designs, these range-toppers make use a tropical hardwood called Cocobolo. The company has used this wood for the bodies of some of its high-end cartridges, and here it feels the wood’s natural tone works well with the carefully tuned in-house 50mm drivers.

Those over-sized foam earpads provide a good seal, and though they don’t feel as classy as the usual leather-covered alternatives, they do the job well enough. In our experience, these foam pads will start to deteriorate after a few years of use, but they’re easy to change and readily available, if pricey at around £60 for the official ones.

Give the GS3000es an appropriate source for headphones at this level – we use a Naim ND555/555 PS DR music streamer/Graham Slee Solo pairing alongside the Mac laptop/Chord Hugo2 DAC combination – and they can’t fail to impress. Don’t be tempted to skimp on the system. These are highly revealing performers that simply won’t shine if fed by less talented sources and amplification.

Listen to alt-J’s This Is All Yours album and the Grados sound right at home among the complex polyrhythms, dense production and hard-charging beats. There’s so much insight here from instrumental textures to the nuances in the group’s vocals that we never feel short-changed. The GS3000es manage to convey the drama of the music superbly, delivering an agile and involving sound that draws us into the music.

We play Olafur Arnald’s Broadchurch soundtrack and the Grados render the music’s low-key but powerful emotions brilliantly. It’s down to expressive and fluid dynamics and the GS3000es' wonderfully composed organisation – every sound fits perfectly into the whole, never seeming random or redundant.

Tonally, these are far more forgiving than the more explicit and forward sounding PS1000es we reviewed last year. There’s more richness to this presentation – probably down to the use of wood rather than metal for the housing – and so it proves easier on the ear. It’s still massively detailed and precise, but just less demanding to listen to now.

Some rivals are more even-sounding than these headphones and certainly a fair few are more refined. The GS3000e's top-end is far more forgiving than other high-end Grados, but still lacks some of the smoothness of premium alternatives from the likes of Sennheiser, Beyerdynamic or Focal.

But, as we spend more time listening to these headphones, we don’t mind these shortfalls so much. We just know that we’re having a great deal of fun.

These headphones aren’t the things to buy if you want to impress friends with luxury or immaculate packaging. Grado has never cared much for such niceties. Its products have always had a WW2 radio operator look about them and the GS3000es are no different.

While the appearance may split opinions, there’s no denying the excellence of the sound. Given a good enough signal, they will outshine most alternatives.