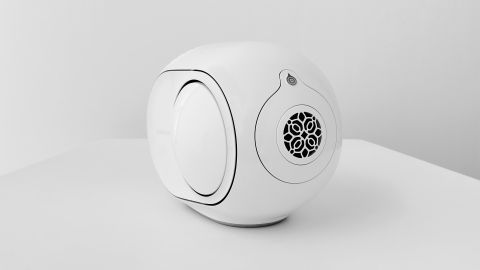 Stunning and bold in its design, the Phantom Reactor 600 unfortunately makes much less of an aural impact

Until recently, many people might have considered Devialet’s Phantom range of premium wireless speakers too rich for their blood. The entry-level Classic Phantom, for example, boasts 1200 watts of power and comes with a £1590 price tag.

Now Devialet has introduced two smaller, slightly more affordable models, the Phantom Reactor 600 (£990) and Phantom Reactor 900 (£1290). The Reactors look like scaled-down versions of the existing Phantom models and still pack in a full dose of the range's innovative technologies for that decent saving in cost.

On review here is the Phantom Reactor 600, so-called because of its impressive 600W power amplification. It is similar to its siblings in that it’s completely dissimilar to any wireless speaker you’ve ever seen before.

So, how to describe this sixth member of the Phantom family? Alien bug? Storm Trooper’s lunchbox? Something out of a Bjork music video? That’s as close as we can get.

It is almost kitten-like in terms of size and personality – just waiting to be scooped up into your hands. Anthropomorphic tendencies abound here; the Reactor 600’s two side-mounted cones pulse outwards, both on alerting you to its readiness and when delivering music. It’s stroke-ably stylish, but still solid.

But for all this cuteness, it is a lion when it comes to output. The Phantom Reactor 600 is amplified by 600W of power and good for a claimed maximum 95dB sound pressure level (SPL), which is similar to the noise produced by a chainsaw or motorbike at close range. It’s loud, and also surprisingly heavy, weighing in at 4.3kg.

Set-up is a breeze through Devialet’s app, whether you’re using one Reactor 600 or stereo pairing two of the things. The in-app playback options include Bluetooth, Spotify, AirPlay and UPnP, and for physical inputs, there’s a 3.5mm analogue and optical audio at the back.

You could always use your phone or tablet to access music from streaming services, but unlike some of its competitors, Devialet doesn’t offer Tidal or Deezer as embedded options here. The Devialet app itself is intuitive, simple to use and features a volume dial, but otherwise there are no EQ functions.

Devialet offers ‘legs’ for the Reactor; three stems screwed into a base that then attaches to the underneath of the unit. A downside is that they’re not adjustable, leaving your Reactor at about hip-height.

We load up some tunes via Spotify, and our initial impressions are of a crisp, clear, forward and attacking sound. The heeled footsteps on concrete during the prologue of Coheed And Cambria’s In Keeping Secrets Of Silent Earth: 3 advance towards the ringing telephone with a piercing clarity. There’s plenty of detail here, even down to Claudio Sanchez’s initial intake of breath before he delivers his opening lines.

It’s a scale of delivery that we wouldn't expect from a speaker of the Phantom Reactor’s compact proportions. The sound is precise, uncluttered and easily fills our room. The bass in particular is even more impressive.

D’Angelo’s Devil’s Pie is typified by one of the grimiest, funkiest bass-lines in neo soul. Few speakers with these proportions can deliver it, but the Phantom Reactor 600 reaches depths with a responsive rumble that's about as technically flawless as one could hope for in a speaker of this size.

But while D’Angelo’s bassline is competently represented in terms of register, the head-nodding swing is not. With the bass so exposed, lack of timing is an issue to the point that it’s actually quite an unmusical sound – the artist’s trademark lethargic, lilting interplay between drums and vocals isn’t obvious enough.

We play Beyonce’s Partition and, while her vocals are crisp and forward, there’s little in the way of texture or dynamic variety, making Queen B’s vocal feel louder than it is in the mix. As she commands the crowd to greet her with “Hey, Ms Carter” we hear her clear, bell-like timbre, but the Phantom Reactor 600 cannot quite convey the expressive depth of her voice, nor the playfulness.

Switching to psychobilly, we stream King Kurt’s frantic, fiesty Gather Your Limbs. Amongst the cacophony of sound, both the comedic timing and the warmth in lead singer Smeg’s outbursts are lacking. This is a band that demands audience interaction, but the rhythmic goading of the crowd and counterplay between guitars doesn’t quite come across.

The four-star Naim Mu-So Qb now comes in at just over half the price of the Phantom Reactor 600, and while it can’t compete in terms of bass, it delivers a notably more cohesive, musically pleasing sound.

We listen to two 600s configured as a stereo pair, too, and the sound does open up, filling our room with impressive volume and weighty bass that is well-distributed. For many, that meaty delivery coupled with a futuristic look might be ideal, but our issues with a slight dischord in terms of musicality persist.

To clarify the potential investment, two Phantom Reactor 600s would set you back more or less £2,000 – money that, if it’s excellent wireless standmounts that you’re after, would be better spent on the KEF LS50 speakers.

The Phantom Reactor 600 looks nothing short of other-worldly. It handles bass admirably and scores high marks for both user-friendliness and connectivity. For many, that will be enough. However, listening to music should be enjoyable, and it does border on academic here.

If a futuristic aesthetic and an impressive volume level are paramount, the Phantom Reactor 600 could be the speaker for you. But the sound feels computerised, and there are more melodic options available for your money.

Read all our Devialet reviews