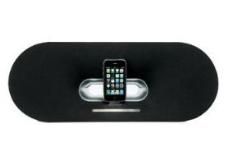 It's not hard to imagine the sales of B&W's Zeppelin iPod dock provoking widespread envy among rivals.

Philips certainly fancies a piece of the action: its new DS9000, part of its swish new ‘Fidelio' range, is proportioned and priced to meet the Zeppelin head-on. It does everything but accuse the B&W of spilling its pint, it's so desperate for a confrontation.

When they're sat next to each other, the impression is even stronger. The DS9000 may feature a pleasingly curvy expanse of tempered timber where the B&W is all shiny chrome, but the price, proportions and general elegance of the Philips must be making B&W feel highly flattered.

Flexible docking
Like the Zeppelin it so admires, the DS9000 is a single-minded device. Aside from its sprung iPod dock (which negates the need for adaptors and will hold most iPods and iPhones, even when they're in a case), it features a 3.5mm input – and that's the lot.

Behind the expanse of black acoustic cloth sit two 25mm tweeters and a pair of 11cm mid/bass drivers – that silver- trimmed hole through the middle of the cabinet serves to isolate left- and right-channel audio in the quest for greater separation and stereo focus. There are two more holes at the back of the unit that serve as bass reflex ports.

The remote control is a sturdy, comprehensive, metal-backed affair – and there's a free download available from Apple's App Store that offers alarm-clock functionality to iPhone and iPod Touch users. Even the volume control on the fascia incorporates proximity-sensing illumination.

Lots (of volume) to offer
What's most immediately impressive about the DS9000 is the scale of its reproduction, followed closely by the sheer volume on offer.

Amplifier power is rated at 50 Watts per channel; that's easy to believe: given a 256kbps file of Ladytron's Seventeen to play, the DS9000 is able to fill even a generously sized room with sound.

It's solidly punchy and amply detailed at the bottom of the frequency range, with enough speed available to keep even the most gung-ho recordings on the front foot.

Voices through the midrange are well separated, nicely textured and packed with information, and there's purpose and attack to treble sounds. The Philips integrates all these threads smoothly, and produces an satisfyingly unified, large soundstage.

Hardening of the treble
A switch to a WAV file of Erroll Garner's reimagining of Cole Porter's It's All Right With Me and an upping of the volume frets the DS9000's composure just a little.

Low frequencies move away from ‘ample' and towards ‘overbearing' and this, combined with a definite hardening of the treble, only just avoids badly squeezing the midrange. There's no let-up in the Philips' attack, nor a lessening of fine detail, but the bigger the volume, the more insistent and relentless it becomes.

Unfortunately, the competition in this sector of the market just got a lot tougher with the arrival of new products such as Arcam's rCube. But if you like your dock loud, you'll find a lot to love in the DS9000.