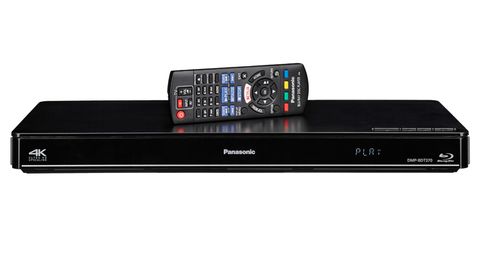 Top tier performance and features for less – a bargain

The Blu-ray player market is more crowded than ever, especially at the budget end, as manufacturers cram it all in and race to slash prices.

Now the higher-ups are slumming it with the less well endowed and you can pay bottom-tier money for top-tier goods. Where previously you had to choose between price and features, now you can have both.

The Panasonic DMP-BDT370 is a very good example of this trend. This is the top model in Panasonic’s 2015 range of Blu-ray players. Time was when we’d have easily paid twice the money for this sort of thing, but no – here it is at £100. Is there a catch?

Not in the design department. Maybe it’s cheap and ugly, we thought as we opened the box. No, the first impression we get is that Panasonic means business. The DMP-BDT370 is a full-width deck, instantly more menacing than its dieting rivals. This is clearly a machine and not a toy box.

We dig the design. The brushed-metal-look panel on top is plastic, but it fools the eye. We’re also glad to see the return of the big flap at the front, which hides everything (disc tray, ports, LED display) very neatly. It has an executive vibe and wouldn’t look out of place next to high-end kit.

We find a standard selection of ports at the back: HDMI, optical out, ethernet. You’ll want the latter for the most secure internet connection, but the built-in wi-fi is strong. Streaming was a stable experience too.

There’s also Miracast, which lets you mirror the screen of compatible devices on your TV.

As for online streaming, you get a selection of key apps, the highlights of which are Netflix, Amazon Instant Video, and BBC iPlayer. It’s not as generous an offering as that found on Samsung Blu-ray players, but it’s not bad.

The system is easy to operate, even if it’s not particularly new. Panasonic has retained the home screen of the last generation, which had tiles laid out to mimic the remote’s directional pad.

It’s hard to get lost, and there’s the pleasant (if unnecessary) bonus of being able to customise a user’s wallpaper background, up to four users.

The ‘smart’ area is a lot less glamorous. It’s the same static grid of apps that Panasonic has been offering for years. We wish they’d shake it up a bit, but it’s hardly a hindrance, especially if it means more effort has gone into spinning plastic.

We are not disappointed. The Blu-ray playing capabilities are top notch. Discs load quickly, and image and sound performance is very impressive indeed. The picture is extraordinarily clear and detail sharp enough to provide insight but without appearing etched and artificial.

Contrast levels are high, with deep darks and scintillating brights. Colours are rich and vibrant, yet convincingly natural.

The Panasonic has a firm hold of motion, even as we spin Gravity for its challenging mix of slow pans and active camerawork. We appreciate the inclusion of picture settings, a facility which lets you fine-tune the image without messing about with your TV’s calibration.

It’s a strong upscaler too. We watch a DVD on a 1080p screen and the picture is nicely defined. There’s little that can be done about the added picture noise and drop in detail, but what you get is clear and stable. We watch a Blu-ray on a 4K TV and at no stage do we feel the need for native UHD content.

There’s 3D too, which is as good as we’ve seen with home 3D. There’s a convincing sense of depth and minimal crosstalk – a lot better than the 2D-3D conversion mode the player offers, which unsurprisingly, is a mess.

But it’s the sound that really impresses us. Panasonic has always favoured a substantial sound – warm and full-bodied – compared with a leaner, more agile offering from Sony.

Here though, it’s the best of both worlds. What you get is rich enough to have a good weight behind it, yet spritely enough to attack and entertain. It’s a properly slamming presentation.

Panasonic has done very well with the DMP-BDT370. With its top-tier specs, features and performance, and a price of just £100, it’s a genuine bargain.