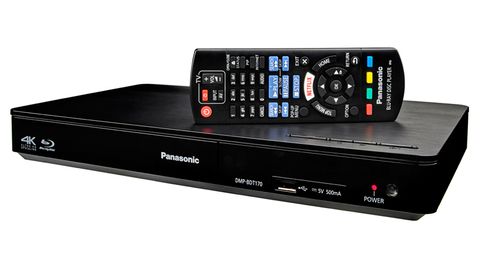 A fine player that excels in picture quality

Panasonic has carried its top-tier models from last year (the DMP-BDT460 and DMP-BDT700) into 2015 – that’s good news considering the latter is even an Award winner.

The company’s entry-level range has been refreshed, though. There are five new models and the DMP-BDT170 is the middle child.

Read our Panasonic news and reviews

It’s not often we’re lost for words, but when it comes to the Panasonic’s design there really isn’t much to say. It’s simply a straight-laced box with a glossy front – but rather refreshing after last year’s fad of quirky designs, we must say.

Thankfully, there’s plenty to say about performance. ‘Normal’ is our go-to picture mode, although ‘user’ lets you adjust brightness, contrast, sharpness and colour to your liking.

Not much fiddling is necessary, though; out of the box, the Panasonic puts in quite the performance.

It’s a stickler for detail. Watch Edge of Tomorrow, with Tom Cruise at his best, and you’re given a wide window into the debacle of battle.

Each grain of sand and rubble on Cruise’s face is visible, and there’s a texture to crumbling mounds of mud that makes you want to reach out and grab a handful.

Whites are impressive, and blacks aren’t just inky deep but clutch onto detail. Colours are strong and arresting: well rooted, though perhaps a touch on the inflated side if we’re being fussy.

Red berets jump out from behind the mesh of khakis and browns, as do yellow tabs on the soldier’s exosuits.

It’s a great asset to carry into DVD performance, especially with a splashy film like Kill Bill: Vol 2. Everything from cars and palm trees to Uma Thurman’s leathers looks inviting and accurate.

The DMP-BDT170 disguises the drop in resolution well, with sharpness, detail and motion all admirable.

Those entering the 4K foray may benefit from its 4K upscaling processing too, designed to bring greater detail and sharpness when used with a 4K telly.

If picture is the Panasonic’s strong suit, then sound isn’t far behind. It’s an exciting listen, delivering the scale and detail to handle the Blu-ray’s dense soundtrack. Gunfire is solid and colliding metal has clunk.

The only thing we’d improve is the slightly tubby bass; machinery crashing to the ground has less ‘thud’ than it should.

Over to stereo with The Cure’s Kiss Me, Kiss Me, Kiss Me album and the DMP-BDP170 tears through the track listing with good energy and drive – just not as much punch or precision as its rival Sony, the BDP-S4500.

It doesn’t boast the split-second start-up of some of its rivals, but is hardly a time-waster, beating us to a count to five every time.

Elsewhere though, speed isn’t the Pana’s forte at every turn. On the home menu, settings and content (from a disc, USB or your network) can be entered by pressing the navigation buttons on the remote that correspond to the grid on screen.

It’s simple enough, but means steering through pages to reach them. You can, at least, prioritise which ones appear on the first app page.

BBC iPlayer, Netflix, Amazon Instant Video and YouTube are onboard, as well as an app market. But catch-up TV begins and ends with BBC iPlayer, which is a shame when rivals offer more.

Our only other niggle is that some of the settings text is white-on-light-grey, so aren’t always easy to read, especially in brighter rooms.

Panasonic did think about eligibility on the remote, though. While we’d prefer backlit buttons, the main playback keys (play, pause, skip etc) are coloured blue, so are easier to make out when the lights go down.

If part of the reason for getting a new player is to add catch-up TV to your set up, then give this Panasonic a miss. Otherwise, jump straight in, for this is one of the best budget boxes on the shelves.