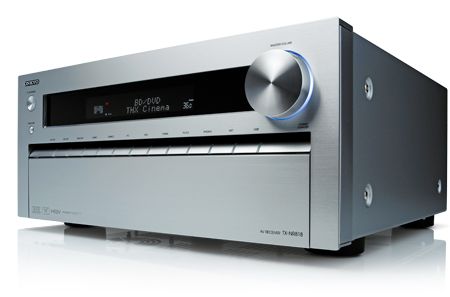 Over the past few years, Onkyo’s home cinema amps have consistently pushed the boundaries of what we should be expecting from multichannel machines.

As a result, our expectations have never been higher. We’ve already reviewed the company’s impressive TX-NR515, (£500) so it was with great relish that we unboxed the Onkyo TX-NR818.

We’re yet to experience what the likes of Yamaha, Denon, Marantz and Pioneer have to offer this year at the ultra-competitive £1000 pricepoint, so it’s a good chance for Onkyo to steal a march on the (pretty fierce) competition.

With Onkyo’s AV amps, you’re almost always guaranteed a more-than-generous feature count, and the NR818 is no exception.

Rated at 135W per channel, this seven-channel amp has no fewer than eight HDMI inputs, capable of accommodating Blu-ray player, games console, high-definition set-top-box, and any other high-def sources you care to throw at it.

You also get twin HDMI outputs, handy if you want to run a picture on two different displays such as a TV and a projector.

For the logo-lovers out there, the Onkyo carries THX Select 2 Plus certification in addition to ISF certification. The ISF allows the amplifier to be calibrated by a trained professional (for a price): the picture settings of each input can be carefully adjusted for each specific source component.

Of course, you’re also free to jump into these picture settings feet first and attempt your own calibration.

New features for 2012 include an MHL (Mobile High-Definition Link) HDMI socket. It can accept 1080p video content, and up to seven-channel surround sound, streamed from a compatible phone from the likes of Samsung, HTC and LG.

The rather neat InstaPrevue technology allows you to preview the images being fed into the amp’s other inputs as thumbnails – useful if you lose track of the other components you’ve got hooked up.

There are also two USB sockets: the rear one is for use with Onkyo's optional UWF-1 wireless LAN adaptor, while the front one can accept a direct digital stream from an iDevice.

Onkyo places great emphasis on the online features of its amps, and the TX-NR818 is seriously equipped. Besides DLNA streaming and support for formats such as 24bit 96/192kHz FLACs, WAVs, WMA Lossless and Apple Lossless, the Onkyo’s arsenal also includes vTuner internet radio, Last.fm, AUPEO! and music streaming subscription services SIMFY and Spotify.

Unlike rival machines from Pioneer and Denon, Onkyo continues to shun Apple’s AirPlay, so wireless music streaming from your iDevice is a no-no. But you can still hardwire your Apple iPhone, MP3 player or tablet into the amp’s front USB input and control music playback through the remote.

Picture processing is handled on two fronts. First, an HQV Vida VHD1900 chip takes care of any 1080p upscaling that may need doing, and also includes special algorithms for cleaning up video content streamed from the internet.

It does a fine job with DVDs, although we’d recommend experimenting with the upscaling abilities of your source and screen, to help decide where best to convert SD to HD.

For those lucky few who own a 4K display or projector, the Onkyo’s Qdeo picture processor can upscale all your content to meet this heady resolution. There is next-to no call for 4K at the moment, but early adopters can feel safe that the Onkyo is suitably equipped.

The remote control is pretty much standard Onkyo fare. It’s relatively functional, even though the buttons are on the small side, and the fact that it isn’t backlit is disappointing at this money.

Smartphone owners also have the option of downloading an iOS or Android app, depending on your mobile operating- system allegiance.

First impressions of Onkyo’s Remote2 app are positive, especially when compared with the supplied wand. But over time it’s a tad sluggish, and the layout could be more intuitive. The ‘enter’ button looks like it works like a traditional D-pad – but doesn’t. The volume control is over-sensitive – a small slip can have it careering past 11.

It always pays to check readings manually too, and we recommend experimenting by turning the amp’s Dynamic Volume and Dynamic EQ settings on and off, as these can have a noticeable impact on sound quality.

Anyone who has heard Onkyos around this price point over the past year or two will be familiar with the sound that greets you: powerful and muscular with an impressive sense of refinement. This is a hugely likeable character and sees the listener entertained over a multitude of musical sources.

The swashbuckling swordplay and explosive ship battles share centre-stage with direct, clear dialogue – as the Flying Dutchman’s cannons rip through a flotilla of helpless ships, the Onkyo doesn’t even flinch, conveying the drama and excitement with ease.

This large-scale sound boasts impressive dynamics, not just during the action scenes but in the quieter scenes too, creating a truly immersive and convincing atmosphere for the listener. The soundfield is strong, focused and cohesive, with no gaps apparent.

The amp found the server on our network easily, and we had no trouble navigating folders and files. But when we attempted 24-bit/192kHz FLACS, there was the odd stutter from our review sample.

Switch to a 320kbps Spotify stream and all is well in the world. Adele’s Rolling In the Deep rumbles along, and Adele’s vocal shines through with a fine sense of refinement. The Onkyo keeps decent time for a receiver and doesn’t embarrass itself.

Make no mistake, the TX-NR818 is a very capable amp for the money, but the bar hasn’t been raised to quite the same new heights as last year. Rival machines are waiting in the wings, so we’ll be interested to see how they stack up against this Onkyo in the coming weeks. We can’t wait.