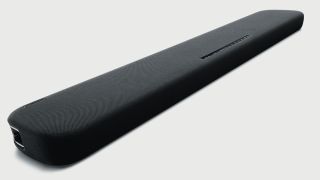 One of the very first purveyors of soundbars, Yamaha has been in the TV sound-boosting game for roughly 15 years – and it shows. Over the years the British brand has won numerous What Hi-Fi? Awards, the latest of which was a 2018 gong for its budget YAS-207 (currently on sale for £249).

The new YAS-109 (£299) and YAS-209 (£399) go big on features, both leveraging their wi-fi support with built-in Amazon Alexa voice control, and network streaming from the likes of Spotify and Amazon Music. There’s a dedicated control app, Bluetooth and the HDMI and HDMI ARC connectivity you’d hope for too.

The difference between the two soundbars: subwoofer arrangement. While the YAS-109 has integrated woofers, the YAS-209 has a separate wireless subwoofer for bringing more (and hopefully better) bass. The bars themselves can traditionally sit in front of a TV or be easily wall-mounted without the need for a bracket.

Yamaha has collaborated with Amazon to ensure the optimal integration of the built-in microphones. The soundbars lower the volume of your music upon detection of a command so you don’t have to shout above the noise to be heard, and Alexa can be muted or turned off completely.

In addition to being able to decode Dolby Digital and DTS Digital Surround soundtracks, the bars offer DTS Virtual:X, which is a post-processing technology that aims to deliver a more immersive 3D soundfield.

The Yamaha YAS-109 and YAS-209 will sit alongside the current YAS-107 and YAS-207 when they arrive in August and September respectively.

Best soundbars 2019: the best TV speakers you can buy