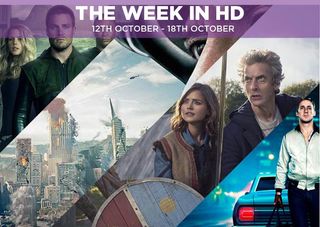 Also, don't forget to check out our dedicated Playlist Twitter account @WHFPlaylist for all the latest news and reviews of our favourite music, movies, TV shows and games.

A disaster film that recalls the epics of the ’70s as well as the soppy melodrama of more recent efforts. When a super-massive earthquake eats up the American West Coast, rescue-chopper pilot Ray (Dwayne Johnson) is called into action to save his ex-wife and daughter from the ensuing devastation.

Clichés abound – especially with Ioan Gruffudd's oily Daniel Riddick – and the story is on shaky ground. But the visual effects are, at times, breathtaking.

Rage Against The Machine: Live at Finsbury Park

In 2009, English DJ Jon Morter started a campaign to stop the winning X Factor single from becoming the UK Christmas No. 1 for the fifth year in a row. His alternative? Rage Against The Machine's Killing In the Name. The campaign succeeded, it became the first download-only single to become Christmas number one, holds the 2011 Guinness world record for fastest-selling digital track (UK), and the proceeds from the sales were donated to charity.

The band played a free concert in Finsbury Park in June 2010 to celebrate the achievement and as a thank you to all the fans - it's a brilliant, energised performance.

Buy Rage Against The Machine: Live at Finsbury Park on Blu-ray at Amazon

Spaghetti Westerns v Railwaymen. Two more winning teams for the first round battle it out for a place in the quarter finals.

First Time Again. Rick and his band of survivors are still adjusting to life in Alexandria in the zombie show's sixth series. A new threat looms ahead, but will it bring them closer together or drive them even further apart?

The Man Who Saved Central City. The Flash is back! After an entertaining and successful first series, the second opens with Barry guilty about the finale's events. But he needs to get back to his heroic ways, as a new metahuman - the Atom Smasher - starts attacking Central City.

Without a Country. Cookie has had enough and decides to start a new record label. Things don't get off to a smooth start when the people she's working with all have different ideas for the new label.

Green Arrow. Oliver Stone and his band of superheroes move to Wednesday nights for their exploits in Starling City. In this series four opener, Oliver and Felicity's getaway is interrupted by a new baddie with a silly name: Damien Darhk.

Sir Alex Ferguson is front and centre in this documentary detailing the development of Manchester United, the football club he managed for 26 years, from a struggling team into a multi-million-pound business with massive global reach.

Featuring an awesome cast, Tombstone sees Kurt Russell's Wyatt Earp move to the titular town in Arizona to retire, only for a group of outlaws to disturb the peace, leading to a gunfight at the O.K. Corral.

It's a bit of a cliché to say they don't make these type of films anymore, but it is rare, especially with a cast of this calibre at the top of their game.

Cactus Shampoo. It's the 11th series of this reality show about seemingly business-minded people, as they go through a series of challenges in hope of impressing Alan Sugar with their business acumen.

With the wry Nick Hewer no longer part of the board, Sugar is flanked by new aide Claude Littner and returning Baroness Karren Brady. In this episode, the new apprentices are told they must create a new shampoo brand.

At least one team will be head & shoulders above the rest.

A Medley of Maladies. It feels like years since a brand new series of QI, but we're finally on the M (or the 13th) series now.

One Arrest. McNulty and his detectives have a breakthrough as their wire tap yields results, but Stringer Bell's suspicions that something is up leads them to mix up the pager routine.

Omar is still on the hunt for who killed Brandon, while Bubbles attends his first Narcotics Anonymous meeting.

The Girl Who Died. Clara and the Doctor are captured by Vikings, but they must also protect the village from savage space warriors from the future. However, the Doctor seems a bit more preoccupied with a single Viking girl (guest star Maisie Williams - Arya Stark from Game of Thrones).

Who is this girl and why is she so important?

Ryan Gosling is a Hollywood stunt driver by day who moonlights as a getaway driver by night in this crime film by Nicolas Winding Refn.

When Driver develops feelings for his next door neighbour (Carey Mulligan), he feels compelled to help when her husband (Oscar Isaac) gets out of prison and in trouble with the wrong people. It's a situation that leads to a bag of missing money and a showdown with Albert Brooks' shady Bernie Rose.

While Winding Refn's style may grate for some, there's no doubt that Drive is not your typical crime film, and it features a terrific soundtrack, too.

It's an early start if you want to catch all the action from Phillip Island. The battle is still on, with Yamaha teammates Jorge Lorenzo and Valentino Rossi fighting for top spot - we think it'll go down to the very last race to find out who the 2015 champion will be.

A fantastic, kooky sci-fi film set in the 23rd century, about an NYC taxi driver who bumps into the most important girl in the universe.

Starring Milla Jovovich, Bruce Willis, Gary Oldman and Chris Tucker, this is a visually dense and exciting ’90s film with brilliant costumes and set designs, and some hilarious performances.