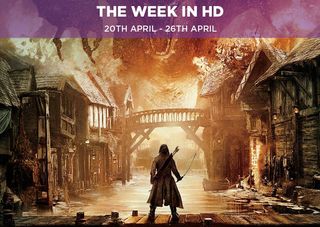 READ: The Hobbit: The Battle of the Five Armies film review

The Hobbit: The Battle of the Five Armies & The Hobbit Trilogy

Peter Jackson's prequel trilogy to the hugely successful Lord of the Rings epic finally comes to an end - for better or worse. The final chapter of the Hobbit trilogy has split audiences: on one hand, the majestic battle scenes and the not-so-subtle winks to future events will please those who wanted more of an LOTR flavour to the Hobbit trilogy.

But for others, the already-bloated story feels even more drawn-out and padded than the previous films, the characters lack emotional depth, and it simply doesn't have the magic and wonder that infused the Lord of the Rings films. Either way, it's a middling end to our journey back to Middle Earth, and we hope it'll be a while before someone decides to poke the dragon with a stick and create yet another CGI-fest of Tolkein's work.

Buy The Hobbit: The Battle of the Five Armies on Blu-ray at Amazon

Buy The Hobbit Trilogy on Blu-ray at Amazon

Do our eyes deceive us? A Tim Burton film without any Johnny Depp or Helena Bonham Carter? Anyone who loved Big Fish and Edward Scissorhands knows just how deftly Burton can combine his gothic touch with bright, colourful pieces and 'normal' characters.

The film is based on the true story of artist Margaret Keane - who found fame in the 1950s by drawing children with big eyes - and her legal battles with her husband, who claimed credit for all her paintings. It's an inspired cast: upcoming Bond villain Christoph Waltz and Oscar darling Amy Adams play the Keanes, with supporting performances from Krysten Ritter and Jason Schwartzman.

The House of Black and White. Anyone missing Arya Stark in last week's opening episode will be rewarded today: Arya finds her way to Braavos, knocking at the doors of the greatest assassin-training establishment (which looks mighty impressive from the pictures we've seen).

We also catch up with Brienne and Pod's adventures, while Cersei fears for her daughter Myrcella's life. The youngest Lannister was sent off to Dorne about two series ago, but since her family orchestrated the death of Dorne's Prince Oberyn of Martell, his family aren't too pleased. Will her father come to her rescue?

Red Hood. We think Gotham's taken artistic liberties with tonight's villains-of-the-week, as the Red Hood Gang has served various purposes in the comics' storyline, from originating during the night of the Wayne murders to being Alan Moore's origin story for the Joker. In this episode, they seem like a Robin Hood-like gang, but with lots of in-fighting.

Back in Wayne Manor, Alfred has to deal with an old SAS colleague who pops by for a friendly visit - but does he have an ulterior motive?

All Star Team Up. A "tech wizard armed with a swarm of robotic bees" is a sentence that we can write for this episode blurb. We are pleased. Felicity and Ray from Arrow drop by to get some help with the Atom suit, but end up helping Team Flash battle this tech wizard and her bees.

The View from Olympus. A man gets hit by a cab, and our dynamic investigating duo deduce that something fishy is going on. Meanwhile, a casual romance gets complicated for Holmes.

It's finals week on MasterChef, and the four remaining contestants are whisked away to Sweden, where a culinary revolution is taking place. After years of getting all scientific with food, the Swedes are going back to basics and using thousand-year-old cooking techniques instead of water baths and liquid nitrogen.

The chefs get to work in two extraordinary restaurants: one where there is no menu and they invent dishes on the day, and another where they use no electric or gas, and simply cook using an open fire.

The Fallen. Team Arrow return to Nanda Parbat, where Ra's Al Ghul makes Oliver a final offer, and the consequences will no doubt lead to the crossover series finale with The Flash in a couple of weeks' time.

The Forecast. Episode blurbs for Mad Men are infuriatingly succint and sparse, but we'd be hard-pressed to describe all the interwoven events that happen in each episode without giving the whole story away.

And so: Roger palms off a new project on to Don, Joan goes on a business trip, and Peggy and Pete can't see eye-to-eye.

Nana's Party. "Don't worry about a the future: you can't predict it." And neither can we predict what plot-twist-y macabre delights Shearsmith and Pemberton have in store for us tonight. Comedy? Tragedy? Horror? Satire?

Whatever it is, we're sure Nana's 79th birthday party will be unforgettable. For all the wrong reasons.

It's the MasterChef final! After seven weeks, we're down to three finalists who now have three hours to cook a spectacular menu to wow the judges. At the end, only one of them will be crowned the 11th MasterChef Champion.

We have our favourites. Who do you think will lift the trophy?

One Door Closes. What happened to everyone else the day that S.H.I.E.L.D. fell? We get a flashback to how the 'Hufflepuff' team - with Bobbie, Isabelle, Mack and Gonzales - survived the day and formed their own version of S.H.I.E.L.D.

In the idyllic secret mountain hideout, Skye is getting to grips with her new powers thanks to help from a very charming Lincoln, but there are some great surprises in store for her (and us).

HBO's show about a start-up company in Silicon Valley is smarter than your average comedy, and it's back for a second series. Fittingly for our times, the programmers are developing a new music app called Pied Piper, but legal battles and a meddlesome competitor are putting a dent in their success.

The Princess and the Frog BBC One HD, 5.10pm

Disney takes on the age-old fairy tale about a princess kissing a frog to break a curse, and gives it a fresh spin. The glorious 1920s New Orleans setting is utterly magical and full of charming characters that would have been at home in Disney's golden era in the '90s, while young waitress Tiana is a fierce, whip-smart heroine for the new generation.

Let's continue this fairy tale Saturday with this fantastic adaptation of Neil Gaiman's book of the same name, where classic fairy tale tropes are played and toyed with and masterfully spun into a funny and adventurous story that's a bit more adult than Disney.

Claire Danes plays Yvaine, a fallen star that young Tristan (played by current Matt Murdock/Daredevil Charlie Cox) has promised as a gift to his beloved. As they make their way back home, they're hunted by evil witches (headed by a cackling Michelle Pfeiffer), run into a cross-dressing sky pirate (Robert de Niro), and dodge the power-hungry Septimus (Mark Strong).

Buy Stardust on Blu-ray at Amazon

Live coverage of the 35th London Marathon, where three-time champion Paula Radcliffe will run her final race. The event will also feature the IPC Championships with the men's and women's wheelchair races - it's going to be a long, exciting (and exhausting) spring day.

Here's a chance to rewatch the eventful Chinese Grand Prix. Lewis Hamilton and Nico Rosberg's rivalry hots up, while Ferrari's Kimi Raikkonen and Sebastian Vettel swiftly rise up the ranks to pose the biggest threat to the Mercedes drivers.