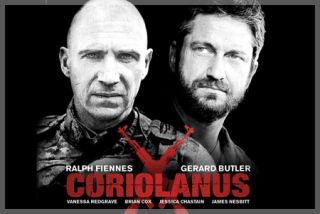 Hello everyone, and welcome back to the Week in HD, your weekly guide to all the great HD and 3D TV shows, films, sports (Euro 2012 kicks off on Friday) and Blu-ray releases.

Hope you had a great Jubilee weekend! While we were away, the Game of Thrones season 2 happened, while Mad Men shocked us all by losing a significant cast member. This week brings us the French Open finals, while football fans get plenty of Euro 2012 action.

Here's our pick of what to watch for the week:

Ralph Fiennes, Gerard Butler, Vanessa Redgrave, Jessica Chastain, Dragan Micanovic and James Nesbitt star in this brutal and bloody adaptation of Shakespeare's tragedy, where the eponymous hero of Rome allies with his sworn enemy to take on the city that banished him.

Valar Morghulis. As the second season comes to a close, we can all breathe a sigh of relief as Tywin Lannister takes over from hateful little Joffrey as the main authority in King's Landing. The episode's title translates to 'All men must die', but Jaquen H'ghar didn't take the blue-eyed undead army into account. The battle for the Iron Throne is far from over, and I can't wait to see how season 3 pans out.

Winter. This three part series explores the flora and fauna of Yellowstone National Park, with this episode looking at how animals survive the six months of freezing winter.

Banquet. Final programme of the series, with the chefs serving up the Olympic banquet.

Entertaining and funny animated film about a young Viking boy called Hiccup and his affinity with dragons, especially the feared but entirely adorable Toothless.

The Death of the Doctor, part 2. Two companions and one time lord - can Sarah Jane and Jo Grant help the Doctor stop the Shansheeth?

Live qualifying coverage from the Circuit Gilles Villeneuve in Montreal.

Captain Barbossa is back! Elizabeth and Will enlist the help of the delightfully mutinous and sassy pirate to help rescue Captain Jack Sparrow from Davey Jones's Locker. Lots of very swish and dizzying SFX.

Live coverage from Roland Garros in Paris. I've lost track, but surely it's another win for Federer or Nadal or Djokovic?

Live coverage of the Canadian GP from one of my favourite tracks on the calendar. Jenson Button won a spectacular race last year, and this race promises to be abother cracking few hours with the promise of having a record seventh different driver for the podium.

If you're already missing all the action from Westeros, it's well worth staying up for this special, where journalist Grace Dent meets writer George R R Martin to talk about his life and everything else about his acclaimed series.