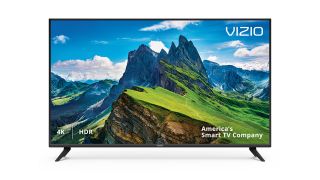 Like Hisense, TCL and Sceptre, US electronics company Vizio has a reputation for making a wide range of budget 4K TVs. But despite the company being synonymous with low prices, it's not often we see 4K TVs that are quite as affordable as these...

If you're looking for a super-cheap, big-screen TV, these could be worth seriously considering. While naturally we wouldn't expect the picture calibre of pricier sets from the likes of Sony, Samsung and LG, there's nothing to suggest from their feature set and generally positive customer reviews that these are nothing other than good-value buys.

In addition to a 4K panel, there is also support for HDR10 and Hybrid Log Gamma HDR formats, which is reasonable at this price.

If you're after a well-equipped, streaming-savvy budget TV, then, one of these Vizio 4K TV deals below could be your buy of the year.

With support for 4K HDR, voice control, Chromecast and plenty of smart video apps, this 50in 4K TV is very well-featured for the price. It's not often you come across a 4K TV for under $300, let alone one with this big a screen size.View Deal

The same TV as above, but with 5 extra inches of screen.View Deal

The same TV as above, but in 65in.View Deal

The same TV as above, but in 70in.View Deal