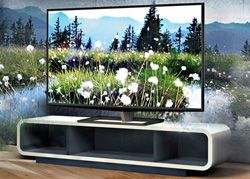 It's arrived! Our review sample of the world's first consumer, glasses-free 3D TV – Toshiba's 55ZL2 – has landed in our test rooms.

Our test team is busy putting it through its paces right now, and we'll be publishing the full review – plus video – here on whathifi.com on Monday, April 2nd.

In the meantime, we've filmed a short unboxing video for you to watch:

And you can read lots more about glasses-free 3D tech in our special blog.

Glasses-free 3D, the holy grail of 3D TV viewing, will be hitting UK shores in March in the form of Toshiba's 55ZL2. It will be available to order from March 12th.

Toshiba has confirmed the news at its UK TV and home cinema product launch this afternoon.

At today's product showcase the company was showing a mixture of native content, photo files, upscaled 2D video and, of course glasses-free 3D.

We're already on the hunt for a review sample! Key tech specs include:

• Hybrid back and edge-lit LED with local dimming

The glasses-free 3D, 4k TV set will be available exclusively from John Lewis on Oxford Street at first before going on sale across town at Harrods. No word on any further availability as yet.

A whole host of other Toshiba 2012 TV models have been confirmed, too, which will include the EL, BL, DL, RL, TL, VL and WL/YL ranges. One L of a range, then.