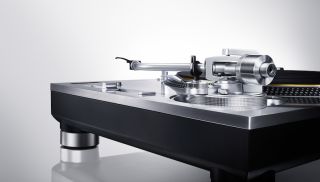 If you don't fancy your chances of getting your hands on one of the 1200 limited edition Technics SL-1200GAE turntables this summer - they certainly sold out in Japan pretty fast - then you'll be pleased to hear that Technics has confirmed details for the SL-1200G.

This is the new Technics deck that will be on general sale - and is pretty similar but for a couple of tweaks to the design and the fact the 'GAE models will be numbered.

Now confirmed for release in "autumn 2016", the SL-1200G has all the familiar features of a Technics DJ deck but is very much focused on audio performance - and there are a variety of design elements that aim to ensure it's up to sonic standards. And as the maker of the first commercially available direct drive platter, Technics should know a thing or two about this.

VIDEO: Watch how a turntable is made

A new 'coreless direct drive motor' has been developed, which aims to better suppress vibrations caused by the motor, while the rotary position sensors, which turn the analogue signal into an electrical one, are guided by a new microprocessor controlled system.

Reducing unwanted vibrations is also why you'll find a three-layered construction for the deck itself, with a heavyweight brass and aluminum platter covered in a rubber layer. And if you like layers, you'll love the four-layered chassis. There's a 10mm thick top panel of aluminium atop the aluminium diecast, BMC and rubber layers of previous Technics models.

As for the price? It's confirmed as the same as the limited edition model, which is £2799 in the UK. Start saving...