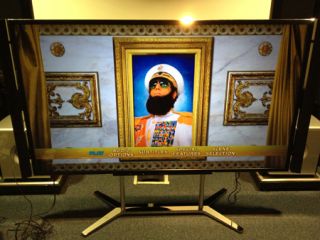 UPDATE Sony USA has revealed details of the movies to be made available to buyers of its 84in 4K, sales of which started in the States this week. It's also indicated how users will be able to get further content in the future.

- The Bridge on the River Kwai

Some bonus short features will also be supplied.

Sony has announced what it claims is 'the world's first 4K Ultra HD delivery solution', which will ship with the launch of the Sony 84in 4K Ultra HD TV.

Customers who have bought Sony's 84in 4k TV in the US have been told that their TVs will come pre-loaded with native 4K content, including full-length Hollywood productions.

In a post on Sony's blog, spotted by The Verge, the company set about answering the issue of a lack of 4K content with the announcement of this content.

The Sony blog says, "In the next couple of weeks, the XBR-84X900 television will ship to customers who placed pre-orders since the product introduction in September.

The post goes on to say that more information will be released "some time after turkey day".

There's no word on whether this US deal will translate to the UK, however, with Sony UK confirming to us that there was no information on such a deal in the UK as yet.