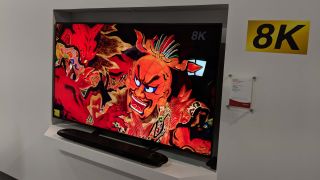 Sharp is not new to the 8K TV game. In fact, it showed an 8K screen back at IFA 2016, then launched what it claimed to be the first 8K TV in 2017, before bringing a 70in monster to Europe earlier this year. So it is perhaps no surprise that the company spent plenty of time talking about 8K TVs at its IFA 2018 press conference.

"8K isn't the future - it's already here," was the optimistic tag line on the Sharp show floor, and with the company's 2nd-generation 8K TVs taking up plenty of space, who was going to argue? 8K broadcasts are set to begin  in Japan later this year - where the company remains a huge player - so there is at least some method to Sharp's push towards pixel-packed panels.

There are now 60in, 70in and 80in Sharp 8K Aquos TVs on the way, due on sale in Japan later this year and promised to arrive in the UK, US and other territories in Q1 2019. The 7680 x 4320 UVA II panels feature a newly-developed picture processor and promise multi-zone local dimming and ultra-high brightness. Naturally it remains to be seen how the relatively flimsy specs transfer to real-world performance.

22.2-channel sound from an 8K soundbar

Not content with 8K TVs, Sharp also threw an "8K soundbar" in to the mix. We can only presume the soundbar can pass-through 8K content, no doubt in preparation for those 8K broadcasts in Japan. The soundbar was also billed as offering Dolby Atmos and supporting 22.2-channel surround sound. NHK, the Japanese broadcaster working on 8K programming, advocates 22.2-channel sound as the sonic standard to accompany its 8K 'Super Hi-Vision' video.