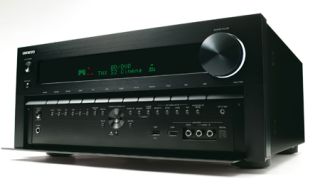 It's also the fourth model in the Onkyo range to be Spotify-enabled, is THX Select 2 Plus certified, has 9.2 channels of amplification and 32-bit processing.

You get Dolby Pro-Logic IIz and Audyssey DSX processing too, plus eight HDMI inputs and twin HDMI outputs for hooking up dual displays.

Naturally the HDMI connections support 3D and an audio return channel, as well as lossless audio and other high-resolution formats.

Hook up the TX-NR1009 via an ethernet connection and you can access Spotify, Napster and Last.fm, as well as internet radio via vTuner and audio streaming from a PC or media server.

In addition, the receiver is compatible with the Windows 7 platform, including the DLNA 1.5-specified 'Play To' media-streaming feature. Wireless operation can be achieved by adding an optional Onkyo UWF-1 wireless USB adapter.

Audyssey room acoustic correction and equalisation technology is included, along with powered zone 2 and 3 outputs.

The Onkyo TX-NR1009 will be on sale in the UK from late June.