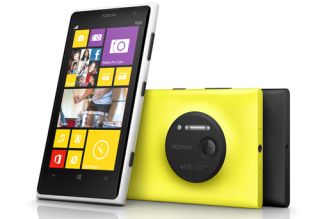 Nokia has launched the Lumia 1020 smartphone, the company's new flagship mobile, which majors once more on pictures thanks to a 41 MP camera.

The dust has barely settled on the Lumia 925 but the new Lumia 1020, announced officially today, is due out in the US in two weeks, while the UK release date is scheduled to be this "quarter".

But it's all about the camera in Nokia's eyes, with a PureView 41-megapixel sensor and ZEISS optics with six physical lenses promising "more detail than the eye can see".

A new app called Nokia Pro Camera will allow you to edit and share your images, while the 1020 will automatically take one 38-megapixel photo and one 5-megapixel photo that will be theoretically much more practial to share due to its smaller size.

A Nokia Camera Grip will also launch as an optional accessory, which can act as a tripod and comes with a built-in flash and mechanical shutter. It has a price of $79 in the US.

Elsewhere the phone supports wireless charging using the cover and also comes with 7GB of free cloud storage from SkyDrive.