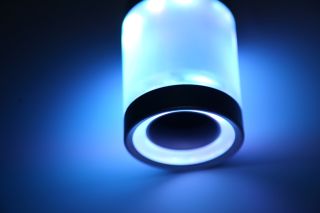 LightFreq is an Atlanta, US-based team that has announced the "first genius hybrid HD audio light bulb" and is now looking to members of the public to bring it to market, with hopes of raising $50,000 through its current Kickstarter fundraising campaign.

It's already too late to take advantage of an early bird offer that would have secured a LightFreq for $55 (£33), unfortunately. But $70 (£42) looks like it'll be the standard price of the product if the campaign proves to be successful – and it's already on track.

But first, what is LightFreq? According to the company, it combines what you'd normally want from a light bulb with a "built-in HD audio speaker" that can be controlled using a Android or iOS app and is seen as a "unique space saving item". We're not quite sure about the "HD audio" claim, mind, as the spec suggests it's just a regular speaker – albeit one with a twist.

The bulb is designed to fit into a normal light fixture and lets you change the colours of the light, the level of light and sound volume, along with the exact hue produced by the bulb. It's also able to change mood, speed or colour depending on the music genre.

Other features include its ability to be used as an intercom and the 'follow me' function, that recognises if you're in the room and will switch on the sound and light until you leave – no doubt very handy if you are someone who sometimes forgets to power off.

You don't need to use the mobile app, with LightFreq able to stream music over a Bluetooth connection up to a distance of 30m. The 5W speaker has a frequency response of 60hz to 20kHz, and the product is designed to work even in extreme temperatures.

LightFreq founder Devon Alli said: "We’re thrilled to be bringing this project to Kickstarter. Its community has such a strong passion for innovation and they truly understand our desire to offer a unique, futuristic, desirable product that’s worthy of their backing.

The LightFreq Kickstarter campaign is due to run until September 4th, but it's not the first speaker-meets-light bulb we've seen this year. Avantconcept proposed a similar concept a few months back, but ended up falling short in its fundraising efforts.