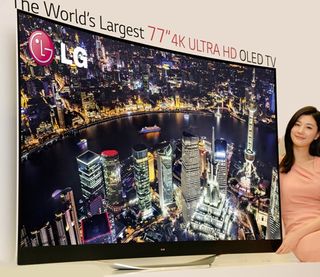 LG will expand the number of Ultra HD (4K) curved OLED TV screens at CES next week, adding new 55in and 65in models to the previously seen 77in model.

The latter now gets an official model designation, the LG 77EC9800, and further details have emerged of its technical specification: it gets 4K upscaling, plus Ultra Cinema passive 3D, LG's own Tru-Ultra HD Engine Pro, the newest version of its smart TV platform and the ability to display Ultra HD content from external devices connected via HDMI, USB or LAN.

It can also decode broadcast signals in both H.264 and HEVC H.265 formats.

Joining the 77in model are the two smaller 55in and 65in ones, which also combine LG's proprietary WRGB OLED technology with 4K (3840 x 2160 pixels) resolution. No prices have been confirmed as yet.

LG will also be showcasing the so-called Gallery OLED model, the 55EA8800 – first seen at IFA in Berlin last year – which has just received a CES 2014 Innovations Award.

The latter incorporates a 2.2-channel, 100W speaker system hidden behind the set's frame and has an eGallery feature to display different works of art on the screen.

MORE: News, rumours and what to expect at CES 2014

At the same time, LG has announced that it has completed construction of OLED TV manufacturing plants in Brazil, Poland, China and Thailand, with an advanced facility in Mexico due to come on stream this year to supply the North American market.