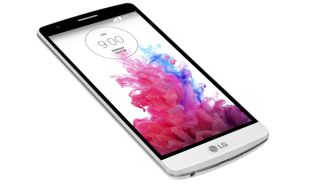 The LG G3 Beat is set for release on July 18th in the company's native South Korea, with a global rollout promised in the following weeks. Prices and release dates for the UK have yet to be confirmed.

The G3 Beat still has a fairly sizeable 5in HD IPS screen, albeit smaller than the 5.5in display on the LG G3, with a 1.2 GHz Quad-Core processor and 1GB RAM; specs that certainly place the phone in midrange territory. There's also 8GB of internal storage plus a microSD card slot for memory expansion.

The same Floating Arc Design - as first seen on the G3 - is carried across to the Beat, while there's also the Laser Auto Focus camera, complete with many of the new camera features debuted on LG's flagship phone. It has an 8MP rather than 13MP front camera lens, however.

LG claims it is now "more possible than ever" to offer a high-spec smartphone at a low price, with a growing trend for consumers to want a more affordable phone that still offers some of the top-end functionality seen on the best smartphones.

Last year saw HTC, LG and Samsung all release 'mini' versions of their top mobiles but now it seems LG will be using the Beat moniker for its midrange variants.