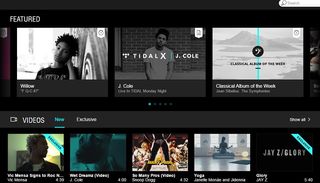 Tidal has come in for some criticism since its star-studded US relaunch, which was judged to have put too much focus on the superstar-backers, and new boss Jay-Z has taken to Twitter to answer some of the critics.

The rapper took to his Twitter account to tweet a "stream of consciousness" using the hashtag #TidalFacts. He said: "Tidal is doing just fine. We have over 770,000 subs. We have been in business less than one month... The iTunes Store wasn't built in a day. It took Spotify 9 years to be successful… We are here for the long haul. Please give us a chance to grow & get better."

Subscriber numbers released back in January by Aspiro - the parent company that owns streaming services Tidal and WiMP, and which Jay-Z's investment company acquired - put the number of users at around 500,000.

This figure included 23,000 users on WiMP HiFi and 12,000 on Tidal HiFi, the two premium, CD-quality services. The bulk of the company's subscribers were users on the standard-quality WiMP offering, which was only available in selected countries, mainly in Scandinavia.

The WiMP branding is set to be retired, so we would assume that the 770,000 figure includes all of the company's subscribers. This would mean around 270,000 new subscribers since Jay-Z came on board.

Pal Bratelund, strategic partnership manager at Tidal, backed those figures, saying: "For anyone knowing the streaming industry, that's substantial in just two weeks. The fun hasn't even begun yet."

Jay-Z also claimed there was a concerted campaign against Tidal. He said: "There are many big companies that are spending millions on a smear campaign. We are not anti-anyone, we are pro-artist & fan. We made Tidal for fans."

He was also bullish about what the Tidal service offers compared to rivals such as Deezer, Rdio and Spotify, saying: "We have more than just music. We have video, exclusive concerts, tickets for events early, live sports!"

And he countered claims that the service was all about the big-name backers. "Indie artists who want to work directly w/ us keep 100% of their music. Tidal pays 75% royalty rate to ALL artists, writers and producers - not just the founding members on stage. Rich getting richer? Equity values... YouTube $390 billion. Apple $760 billion. Spotify $8 billion. Tidal $60 million.

"We have Tidal X - it supports artists by giving them a platform to connect with their most loyal fans. Tidal is for all. We are human (even Daft Punk ha). We aren't perfect - but we are determined. #TidalFacts."

Tidal faces tough competition from the established players in the streaming market, while Apple is widely-tipped to launch its music streaming service in June at WWDC.