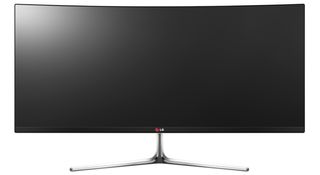 The new monitors, which are likely to launch alongside the G3 Prime and G3 Stylus smartphones, show that curved displays and 4K resolution screens look likely to be key trends at Europe's biggest tech show next month.

The LG 34UC97 is the curved IPS screen 21:9 display in question, a 34in monitor with a 3440 x 1440 resolution and a high-speed Thunderbolt 2 connection, it's said to be aimed at digital photographers and film-makers. It also boasts a 178-degree viewing angle.

It will launch at IFA alongside the LG 31MU97 Digital Cinema 4K Monitor and the 24GM77 Gaming Monitor. The former squeezes 4096 x 2160 pixels in to a 31in screen, while the screen for gamers aims to major on smooth motion thanks to a 144Hz refresh rate. LG's Dynamic Action Sync (DAS) mode also claims to cut input lag.

IFA 2014 officially begins on 5th September but we'll be on the ground from Wednesday (3rd September) to bring you the all the news on the latest products.