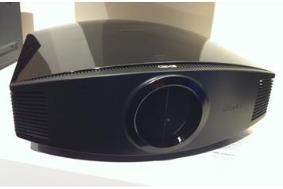 Aah, seems the whole press conference is in 3D while we post on the site in 2D. Bring on the headache tablets!

• Sony PS3 update for 3D Blu-ray films promised "by the end of the year" – looks like that original late-September date may not be met after all. Ah, Sony PS3 3D Blu-ray upgrade "will be finished by October".

• Sir Howard Stringer, Sony CEO, takes the stage and is talking about Sony's partnership with Google for Android-driven internet TVs.

• First Google TVs from Sony will be available in the USA this autumn. No more details of wider rollout in other parts of the world.

• Sony will bundle 3D Blu-rays of Michael Jackson's This Is It and Disney's Alice in Wonderland with selected 3D kit in the run up to Christmas.

• Hollywood is expected to release 30 3D films this year; up from 16 in 2009. Sony Pictures is working on Green Hornet and Men in Black in 3D.

• Sony says it is working "very closely" with Sky on its forthcoming 3D TV channel. There's talk of documentary content (including nature programmes) and sport.

• Sony will release a 3D Blu-ray disc of this year's World Cup by the end of the year. Sadly – or perhaps not! – the extended clip we've just seen had no England game.

• We're now being treated to a live performance – being filmed in 3D, naturally – by renowned pianist Lang Lang.

• At last! Sony announces 3D projectors. First model is the VW90ES: Full HD, 1080p with active shuter glasses, based on SXRD technology. No pricing yet. It's an evolution of its top-rated 2D model from last year.

• Confirmation, as we hoped, that Sony BDP-S770 3D Blu-ray player will be in the shops by October.

• Sony plans to launch an on-demand video, music and game-streaming service, Qriocity, in the UK, Spain, France, Germany and Italy this autumn.

• Qriocity will stream to a range of Sony's network-enabled devices, including portables. There will be eBook streaming soon too.

• Qriocity movies will be available from all major studios and be available to view for 14 days after download, and as many times as you like.

• Further details on Qriocity UK pricing to be announced "in due course". A familiar phrase already here at IFA. Don't worry, we'll hunt down the info...

• Qriocity music service will be available via Sony TVs, Blu-ray players, PS3 and Vaio PCs ahead of smartphones and Walkman portables.