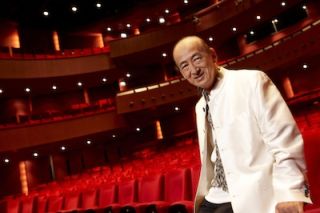 As Marantz prepares to launch the successors to its Award-winning CD6003 CD player and PM6003 stereo amp – see news on the CD6004/PM6004 here – we caught up with the company's Brand Ambassador and all-round audio guru, Ken Ishiwata, to talk more about the new products.

A man with more airline loyalty miles than most of us will ever have Clubcard points, he's currently spending some time in China on holiday – but being Ken, that means he's still working.

He's been attending a projector launch, talking to audio and home cinema reviewers, and of course answering email questions from me and some of our forum members about design points on the new CD player and amp.

KI: As you know, Marantz has long been successful in this category, even in what I call the 'two digits' period, when we made products such as the CD-63, -65 and -67.

But while in the past we used to bring out new models every year, recently we've switched to a two-year replacement cycle in stereo products such as these.

However, while we might have been able to extend the CD6003 and PM6003 for another year, our competitors are trying very hard to catch up, so we have to make sure our leading position will be maintained.

AE: So what improvements do the new models bring?

KI: Well, one obvious thing on the CD6004 is that, when you connect an iPad to it, it'll now charge! The iPad is getting very popular, but the CD6003 couldn't charge it, simply because it consumes too much power.

It's not easy to deliver such high charging capacity without it affecting sound quality, but we've taken great care on this one and finally managed to get it working.

The player also has a new CD mechanism with a new DSP decoder, which is an improvement on the last model, and due to this change we've also altered the layout so the DAC and clock are closer together, thus reducing jitter, and of course adapted the power supply layout accordingly.

Oh, and we've also improved the headphone amplifier: it now sounds much better than before.

For the PM6004 amplifier, we've basically made a completely new design, with fully discrete circuits. The engineers in Japan have done a wonderful job on this one, and I'm very happy with the results.

The improvement in detail and the way speakers are driven are very much to my personal taste, and I believe we can use this platform for quite a while.

AE: Just how easy is it to keep improving products like this, which are built to sell at a very affordable price and are thus specified to a tight budget?

KI: It's getting hard, but there's always some area in which you can improve.

Cost is the really difficult bit, especially with the Japanese Yen so strong these days – it's not easy at all, but these are our key models, and we have to maintain our market-position.

You know well how Marantz products sound – we're keeping the same direction for the sound, but refining all the time. In my opinion, that's key for these products.

AE: One of our forum members was wondering why there isn't a DAC in the amplifier, when so many people use digital sources other than CD…

KI: As you know, digital is very noisy until it's converted to analogue, and the function of an amplifier is to boost very low-level signals so they can drive speakers, so it must have very high gain.

That's especially true with an amplifier like the PM6004, where the phono stage is handling tiny signals, so the amplifier must be very sensitive.

If you feed digital signals into an amplifier, it's very easy for the 'noise' of digital to jump into other circuits, and this will degrade the sound of the amplifier.

Yes, having digital inputs is convenient, but if you're after performance, it's better not to – AV receivers are designed to function like that, but for a pure music-only system it's best to avoid this.

That's why we put the USB input on the CD player, which of course is already handling digital signals, and decided not to change the analogue amplifier.

AE: Another point raised on the forums was some doubt about the wisdom of launching a new CD player now, when there's a trend towards switching over too computer based music. Some are saying that CD's days are numbered…

A lot of people are using CDs to play music at home, thus reasonably-priced, good-sounding CD players are still an important segment for our business, and one in which we have been very strong.

Of course, we know non-packaged media are becoming very popular, which is why we have the NA 7004 network audio player, and network audio capability on our AV receivers, but in our opinion it'll take quite some time to change over completely to network players.

AE: One more from the forums, where someone was hoping the new products would have the premium gold/champagne colour as an option to black, rather than the newer silver…

KI: People's tastes change, and in our industry things have changed between black and silver many times, and of course Marantz has also had the champagne gold colour.

However, in the UK we've noticed the favourite colour is black.

Marantz now has one cosmetic design from the top of the range to the budget end: it's a very strong identity, and a similar approach to that of BMW or Mercedes in the car industry – you can recognise the brand immediately from the look.

Our gold colour was one of our identities as well, so yes, we'll keep gold for our Premium series products. But for the likes of the CD6004 and PM6004 – what we call our Range series – we adapt to the requirements of the market.

AE: Finally, Ken, it looks like just about every company is now offering a standalone DAC with computer USB inputs: have you any plans in this direction?

KI: As we've already discussed, network audio players are getting very popular everywhere, and since we introduced the NA 7004 we've had quite a good reaction so far.

On top of that, AirPlay is getting very popular as well, which is why we provide it on the NA 7004 and some other products.

The combination of convenience and performance to satisfy today's customers will be the key to success.

While I can't currently tell you in what form we will develop products to satisfy those needs, one thing is for sure – we'll always come up with Marantz products!

Which means performance will never be compromised…