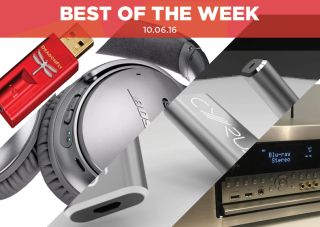 MORE: The best What Hi-Fi? deals of the week

Cyrus turns to Kickstarter to fund development of its SoundKey DAC

You wouldn't expect a well-established brand like Cyrus to look to Kickstarter for funding. But for its latest project it's done exactly that.

The company is looking to raise £50,000 to develop the SoundKey micro DAC for smartphones and tablets. The idea is to improve the sound quality of mobile devices, drawing as little power as possible so your phone's battery won't be drained.

You can register your interest over at the SoundKey microsite. Kickstarter pledge levels will be announced soon.

Last week we caught wind of Denon's plans to release its fourth generation of X Series AV amps. It has now added a couple more premium models higher up that range.

Both home cinema amplifiers are expected to go on sale October 2016.

Marantz has announced its 6006 series of hi-fi separates, replacing the 6005.

The CD6006 CD player and PM6006 stereo amplifier have been retuned and fitted with new “specially selected components” to improve sound quality over the 6005 series.

They are available to buy now for £399 each.

Roberts Stream 65i is a feature-packed, multi-room sound system

Bose is known for its impressive noise-cancelling headphones. With the QC35, the company has upped its game and gone wireless.

While that effective, “sound-sucking” noise cancelling remains, the QC35s also have upgraded features. It is graced with Bluetooth and NFC, and AAA batteries are now off the menu, with a rechargeable battery that will last a claimed 20 hours.

Audioquest’s two-pronged attack pits the Red as the more upmarket option. It features several upgrades, including a more advanced DAC and headphone amp, and a higher voltage to drive more demanding headphones.

Is it enough to justify the £170 cost? In our eyes, certainly. The Dragonfly Red is as convenient and elegant a solution out there - and it's one we highly recommend.

Luxman has never made a big impact on UK shores. It hopes to change that with the release of its preamplifier/power amplifier combination.

From the off the retro aesthetics and solid build make these desirable pieces of kit.

In terms of the performance, the power amp fares better than the preamp, though. Together, they're accomplished performers that keep out of the way of the music - and that's something to appreciate.