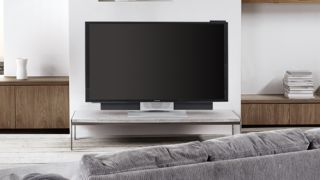 Bang & Olufsen today launched the latest addition to its BeoVision range of premium TVs, the BeoVision Avant, a 55in 4K Ultra HD TV.

The B&O BeoVision Avant is available to order from today and will set you back a cool £5995.

Launched with the tagline, "The One That Moves", the Avant is at its most impressive when partnered with one of a range of optional motorised stands, which aims to help the TV blend in with its environment when not in use.

B&O has given plenty of thought to picture performance, not only making the decision to opt for an Ultra HD resolution screen ("ready for tomorrow today"), but also including picture processing technology such as adaptive contrast and chromatic room adaption to adjust the picture to suit the brightness and hue of the ambient light in your room.

A sensor on the top right of the panel is available to read the light both in front and behind the screen and will also help to counter screen reflection.

Billed as B&O's new "flagship entertainment centre", the TV comes with a "three-channel stereo sound panel", which drops down below the screen when the Avant is turned on.

Essentially an integrated B&O soundbar, the speaker has eight drivers, each with its own amplification. Three tweeters, three midrange drivers and two bass units aim to deliver the experience of a centre channel and stereo speakers.

The sound panel has been tuned by the B&O's "tonmeister", the technolgy specialist in charge of sound design at B&O, Geoff Martin, in line with Bang & Olufsen's belief that "sound is half the picture".

A wireless transmitter is also built-in to the speakers, allowing you to connect to additional B&O speakers. Up to eight wireless speakers can be linked to the system, as well as up to 10 wired speakers, making for a theoretical maximum of 21 speakers (including the TV's own).

The inclusion of a calibration mic allows the Avant TV to run through a series of speaker set-up, too.

The Avant TV also comes with the new BeoRemote 1. This slender, aluminium remote control claims to offer much of the functionality and convenience of a universal remote control.

There's one-button operation of multiple sources, control of external devices such as a Sky+ HD box and remote control of the motorised stands and mounts.

The TV isn't cheap, naturally, and neither are the optional mounts and stands. All the motorised stands will cost £1195 – there's a wall-mount, pedestal and floorstand option – while the static stands start from £600.

The Bang & Olufsen BeoVision Avant is available to order from today as a 55in TV for £5995.