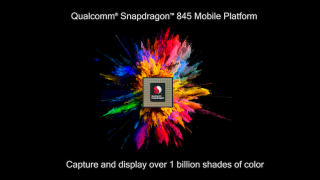 If you know Qualcomm, it’s probably as the chipset company supplying the brains of Android smartphones. Well, it’s now announced its latest chip, the Snapdragon 845… and it’s good news for budding videographers.

The platform, thanks to the chip's Qualcomm Spectra 280 image signal processor and Qualcomm Adreno 630 visual processing, has been designed to allow not only the display, but also the capture, of “cinema-grade” videos.

Smartphones powered by the Snapdragon 845 chipset (expected to be next year’s flagship Android handsets) will be able to capture 10-bit colour depth and 64x more high dynamic range for playback on Ultra HD Premium displays.

With more and more phones now boasting 4K HDR-ready screens, such as the Samsung Galaxy Note 8, Xperia XZ Premium and LG V30, the implementation of these visual technologies makes sense.

In other news, Qualcomm seems just as concerned with smartphones’ audio performance - it's spreading its wings to deliver a digital-to-analogue converter (DAC).

Cashing in on the fact headphone jacks are becoming obsolete, it's introduced the AQT1000 Aqstic Hi-Fi DAC, designed to plug into a phone’s USB-C port and offer ‘higher quality’ sound through its 3.5mm output.

It's design to support PCM files up to 32bit/384kHz as well as native DSD files.

But rather than be available as a dongle, the chipset will simply be available to accessory-makers to implement in their own dongles.

If it’s effective, it could be bad news for purveyors of portable, designed-for-smartphone DACs…

Amazon and Apple take What Hi-Fi? Awards for smartphones and tablets