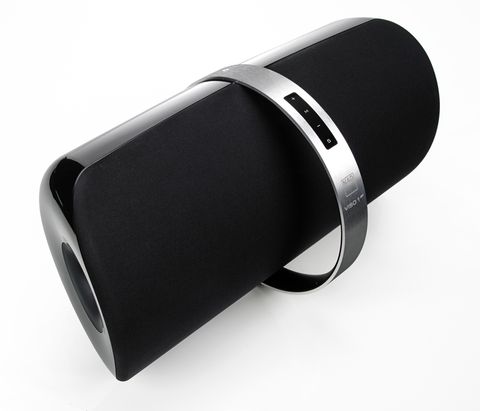 Great sound, great looks and good connections: this is an excellent all-rounder

When we reviewed the original NAD Viso 1 back in 2012, we liked it enough to give it the full five stars. We applauded its extensive specification, fine looks and excellent sound performance.

Our only criticism was that, unlike some rivals, it didn’t feature AirPlay.

Now we have the NAD Viso 1 AP, which addresses that gripe very specifically (along with a few other tweaks).

It’s a great-looking machine. Build quality is very high and the device is beautifully finished.

Its rounded edges give it an elegance blockier rivals lack, and the large metal ring in the centre adds a touch of pizzazz without appearing too ostentatious.

That ring once hosted an iPod-docking cradle, but that’s been replaced with a handful of illuminated soft-touch buttons.

According to NAD, the dock was eliminated because many customers preferred a Bluetooth connection. Bluetooth remains - in the higher quality aptX variety no less - and is joined by AirPlay.

A USB port at the back handles iPod duties as well as memory sticks.

There’s also a 24-bit/96kHz-capable digital optical input in case you want to hook it up to the digital output of your TV. Network set-up is a breeze. There’s an ethernet socket for a wired connection.

To go wireless, you can plug in an iOS device to copy over your existing wi-fi settings. Bluetooth connection is even easier.

As soon as we activate the feature on a smartphone, it picks up the NAD’s signal. Pairing takes seconds.

Control methods are down to what you’re using to stream music. If you have an album playing, you can use the NAD’s own basic stick remote to control playback and volume.

In Bluetooth mode, the stick remote would control only volume. In that instance, track changing has to be handled at the source (in the case of our test, by means of a Sony NWZ-F886 Walkman).

When it comes to the NAD’s audio performance, we are very impressed.

The sound is among the best we’ve heard at this price. There’s a huge sense of scale with plenty of power, and the system has a lively, likeable demeanour.

The presentation is smooth and refined: play some harsher, low-quality tracks and the NAD is fairly forgiving.

There’s plenty of detail, and you’ll be able to pick out the finer nuances and textures of a track. There’s also a good deal of energy, helped by the rumbling deep bass. It’s never overstated though.

The NAD Viso 1 AP is a success. The removal of the iPod dock is no great loss thanks to the wireless flexibility.

This is a strong, rounded package and thoroughly deserving of your consideration.