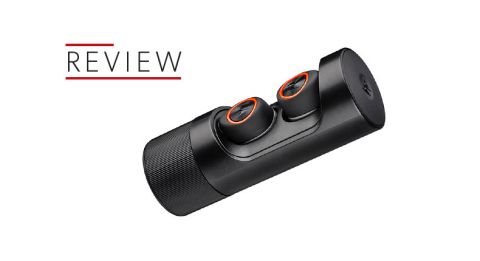 They’re cheaper than the VerveOnes+ we tested last year - and converse with Siri and Google Now - but that disappointing, two-star sound remains.

We all remember our first pair of true wireless in-ears. It’s a story we’ll tell our children and our grandchildren.

That memory will flash before our eyes, placed somewhere between our first day of school and watching through the window of the nursing home, rain trickling down the pane, as the aforementioned children drive away.

It’s likely we’ll have been discarded by our families specifically because of our relaying of that story, decades on still grumbling about Motorola’s two-star VerveOnes+ and their shattering of our fledgling true-wireless dreams.

But that was the summer of 2016, and, when Motorola returned to our testing rooms nearly 18 months later with its VerveOnes+ Music Edition in-ears, there was a sense of renewed optimism.

Not least because, of the few discernable differences between each pair’s specification, this new, cheaper option lay claim to what the company describes as “rich HD sound”.

Despite their reduced price tag, the VerveOnes+ MEs offer much of what made their older cousins such a tantalising prospect to begin with. They’re water- and sweat-proof, offer six EQ presets and can be controlled via the ‘Hubble Connect for VerveLife’ app for iOS and Android, which will also tell you handy stuff like how much power remains before they need another little rest.

Motorola has also included dual integrated mics and full control of Siri and Google Now, bringing its VerveOnes+ range right up to date - and even overtaking many of its competitors, features-wise.

The charging case is a kind of revolving-door-cum-lipstick design, whereby twisting the bottom will reveal the earpieces’ chamber then close the door for a discreet charge. It’s a neat design, let down by its unreliability - there were times during testing we’d tucked the VerveOnes in, seemingly charging, only to find them a couple of hours later with batteries as flat as pancakes.

Reliability isn’t, in fact, a much of a forte for the VerveOnes+ MEs at all.

While connecting via Bluetooth is as straightforward as you like, we’re reaching the point now where signal cut-outs (to which every manufacturer seems to fall victim from time to time) are becoming less and less acceptable. Using these Motorolas we experience more interruptions than a Paxman interviewee. It has certainly contributed to the Motorolas’ lost stars.

In terms of the performance, they stay just the correct side of listenable. The midrange and treble can be coarse at times, especially with arrangements where there is little bass weight to weigh the mix down.

It isn’t so sharp as to be unpalatable. It’s just a little lightweight and unrefined.

That’s effectively the VerveOnes ME’s story: everything is just a little bit off. They struggle with timing when rhythms become complex, lack any sort of punch when hair ought to be let down and forgo expression and dynamics almost completely.

It’s all quite flat. There’s some amount of detail, but so little to differentiate strands other than timbre and notation that there would almost be little point it being any clearer.

And being cheaper just isn’t enough, especially when Sony’s Award-winning WH-1000X cost only £50 more. VerveOnes, you will always be our first, but this just isn’t working.