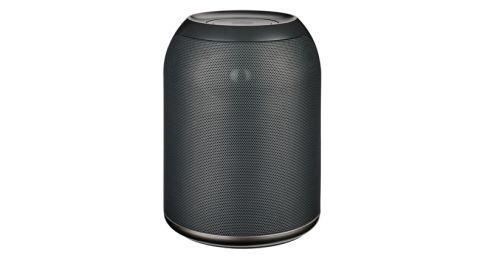 Usually we’d prefer an all-rounder, but the Audio M proves its worth bringing melody and beats to the fore

Once upon a time, nightclubbing on a shoestring meant smuggling in a couple of tins down the front of your trousers. With its Audio M speakers, Ministry of Sound appears to be offering an alternative.

Not only are there two free tickets to its London club with every purchase, the app offers access to all eight channels of Ministry of Sound's own radio station and real-time broadcasts from the club on Friday and Saturday nights.

First impressions of the Audio M are decent. It's far from flashy – think a cross between a wastepaper bin, dehumidifier and R2-D2 in mourning – and it feels like it’s built to last.

The front grill conceals a tweeter and mid/bass driver, vertically aligned, big enough to give your music some welly.

There are buttons for power and Bluetooth pairing, but a disc on the speaker's crown allows you to alter volume and change track through a range of strokes, taps and swipes.

It certainly makes the kit look smarter, but we find it a tad temperamental, and spend more time trying to find the right volume than listening to a song.

We jump in with Fake Blood's I Think I Like It. The Audio M is more-than capable of delivering a track such as this with a great spirit. There's a cracking amount of attack to the percussion and a mix that brings the infectious cut-up melody to the fore.

Okay, so it isn't going to turn your gran's spare bedroom into a super-club – the balance is left wanting somewhat in the bass – but there's enough oomph and, most importantly, it's great fun.

We move on to Faithless’s Not Going Home, a similarly dance-friendly track but with more focus on vocals, and find that it lacks a little detail when there's a lot going on. But it still isn’t enough to ruin the party.

Though you lose some clarity and the warmth that helps Maxi Jazz's voice become more lifelike, the Audio M focuses on what's important for the style of music.

That detail returns somewhat when the speaker isn't overloaded with thick textures. We play Roddy Woomble's I Came In From The Mountain and are pleased with the delicacy of the dynamics with the acoustic guitar and vocal.

There's a nice amount of space between instruments and harmonies too; the treble is perhaps a bit bright, but overall it's a sweet reproduction. More warmth for the vocal would help it bed in and feel more realistic though.

As a rule, getting freebies often means what you're actually paying for isn't that good, but in that respect, the Audio M is a pleasant surprise.

It isn't the most sonically outstanding wireless speaker, but for £150 it's a tidy piece of kit.

It has plenty of wallop, it's versatile and entertaining, and if it's a party you're after, there are worse places to go.

See all our Ministry of Sound news and reviews