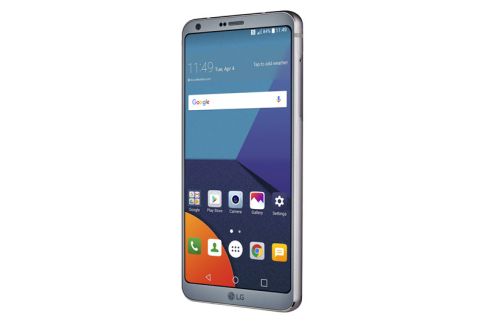 The LG G6 has a new screen and lots to like besides, but its audio performance lets it down

A great idea doesn’t always make something a success.

Take the LG G5, for example. While the clever modular smartphone was our favourite phone of the year with the help of its B&O-tuned Hi-Fi+ DAC, it failed to compete with the Samsung Galaxy S7 and Apple’s iPhone 7 in terms of sales. And for LG, that’s never going to fly.

This year, the company has gone back to the drawing board, doing away with more niche innovations for the type that everyone can get behind – a better screen, better camera and better performance.

With Samsung’s bezel-busting handset nipping at its heels though, has LG done enough to keep its fellow Korean rival at bay? It’s not going to be easy…

LG is no stranger to playing around with aspect ratios (remember the 21:9 LG Chocolate?), and with the LG G6, it has opted for a more unusual 18:9 format rather than the standard 16:9.

LG calls it a 'Full Vision' display, and its dimensions mean the 5.7in screen fills 85 per cent of the front of the phone, with very little space wasted to bezels. It also means you get more screen on a phone that feels no bigger in your hand than the phone’s 5.2in predecessor, so one-handed use is well within reach.

With more space, the resolution takes a jump up, moving from a 2560 x 1440 resolution to 2880 x 1440. Though there isn’t much 18:9 content currently available, LG tries to make the most of the larger screen with built-in app scaling technology.

You can set each app individually, choosing between 16:9, 16.7:9 (which leaves the bottom for the navigation bar) and the full 18:9 ratio.

Of course, a lot of LG’s own apps, such as the camera and gallery, have been built specifically for this resolution.

Netflix does too if you click the ‘fill screen’ arrow, as will movies saved to your phone. There is some slight clipping of content at the edges, but we’ll take it in exchange for the full-screen view.

It’s early days though, and as well as more native content, we’d expect app developers to consider this new aspect ratio much more in the future, to make the most of screens like this and the one on the Samsung Galaxy S8.

In use, the LG G6 offers a crisp, sharp picture with a good level of fine detail and colours that look bold but natural.

Despite being an LCD panel, contrast is a strong point, just beating the iPhone 7 Plus for deep blacks, with whites that push through dark scenes with more punch and precision. Stars in a night sky, for example, look clearer and better defined than they do on Apple’s handset.

This is no doubt helped by the phone’s brighter screen overall, which it needs to support the peak brightness levels found in HDR10 and Dolby Vision HDR content, which the G6 supports.

There’s no denying that the slightly fiddly, rather geeky design of the LG G5 left a lot of people cold. For those wanting a premium look, such as the Samsung Galaxy S7 Edge, the unsightly seams and extra bulk from the G5’s added modules couldn’t really compete.

The LG G6 is a different story. All metal edges and glass front and back, its smooth, slim unibody certainly looks the part – but doesn’t quite feel as nice in the hand as the iPhone 7 Plus or the Samsung Galaxy S8.

The Gorilla Glass 5 that coats the back of the phone isn’t as premium as we’d like, and even though it’s perfectly well made and makes the phone hardier than before, you would be forgiven for mistaking it for plastic.

The anti-fingerprint coating on the back helps the glass finish look smart for as long as possible – a worthwhile endeavour. Our silver version fared pretty well during testing, but the black version may not be so lucky.

The fingerprint sensor and home button sits on the back of the handset as it has done since the LG G2, but for the first time, the volume buttons have moved to the left-hand side of the phone instead, leaving the back button solo.

Despite the phone’s taller dimensions, it remains a sensible and natural spot for a fingerprint scanner to sit, and it works as quickly and reliably as ever.

The waterproofing we’ve coming to expect from flagship handsets in 2017 gets an upgrade in the G6, thanks to IP68 dust and water resistance that now includes sea water.

This means it can take on the watery elements to a depth of 1m for up to 30 minutes. Both its USB-C port and headphone jack are completely waterproof, so no need for fiddly protective covers.

We enjoyed the G5’s dual camera offering last year, with one 16MP snapper in charge of standard shots alongside an 8MP one for 125° wide-angle pictures. This year the twin cameras are back, but have been brought into line, both boasting 13MP sensors for more consistent quality and smoother transitions between the two.

They’re a lot of fun to use. While manual photographers will have a field day in the options menu, they’re just as enjoyable to use on auto mode, and largely capable of capturing good results first time.

The wide-angle lens is impressive, pulling everything the eye can see into a single shot, without dropping any detail. The bright f/1.8 main lens is the better option for low light though, with the wide-angle option showing up considerably more grain in murkier settings due to its narrower aperture.

Given good light, they both create bright, vibrant pictures with decent dynamic range, quick autofocus and plenty of detail. The HDR mode is reliable and quick too, and will jump into action automatically when it detects a picture that needs it.

Overall, they are a strong and innovative pair of cameras, which are supported by a 5MP 100° wide-angle selfie camera and 4K video recording with lossless audio recording.

Running the show at the heart of the LG G6 is the Snapdragon 821 chip, alongside 32GB storage (plus a microSD card slot for boosting up to 2TB) and 4GB of RAM.

It’s not the most recent Snapdragon 835 chip found in the Galaxy S8, but it offers a smooth and fluid experience. It’s fast enough to take on a good amount of multitasking and there are no hiccups with graphic-intensive gaming either.

That is no doubt helped by LG’s light-handed touch on its UX 6.0 interface that sits over the top of Android Nougat 7.0. A handful of minimal tweaks to the design have left it looking clean, unfussy and very close to stock Android.

Set up your “Okay Google” wake phrase and use it to send emails, take photos, control your smart home or check out your local area.

As for battery life, the 3300mAh battery (500mAh larger than the G5) does enough to push you on through a full day’s use with a bit to spare.

The G6 comes with Qualcomm’s FastCharge 3.0 on board and a fast charger in the box, getting you from zero to full in around an hour.

After rumours that the headphone jack was set to disappear from smartphones in 2017, we’re pleased to see that LG has kept the 3.5mm input. You can still use your favourite headphones with no need for an adapter or an upgrade.

However, the superior quad DAC by ESS we’d heard the phone would use is reserved for the G6 in Asian markets only, due to price concerns. After placing the focus on audio performance last year, that’s disappointing to say the least – even if it does support hi-res 24-bit/192kHz tracks.

The result is a sound that leaves us wanting. First and foremost, timing and detail still fall short, and the G6 is easily shown up by the rhythmic fluidity heard on Apple’s iPhone 7 Plus.

It’s a clean and confident sound, but one that’s upfront – it isn’t able to convey dynamics as explicitly as the iPhone, and can come across as a little incessant and unsubtle with softer recordings.

It could do with a little more richness or weight in the low end to help balance this out, as it leans towards being too forward and a touch too bright for our tastes.

This is also the case with its external speaker too, which despite having volume to spare and sounding a little less closed in than the iPhone 7 Plus, lacks some solidity. This makes longer listening a little tiring.

Innovation is only innovative if it catches on. That was the problem with the G5 – we liked it, but it didn’t inspire the masses.

LG hopes to change that with the G6, with an interesting new screen, backed up by a design that works well, plenty of power for multitasking and a pair of fun and intuitive cameras.

While that’s all well and good, we can’t help but be disappointed the audio performance has taken a step backwards, especially when a better DAC exists in models elsewhere.

You can’t always please everyone, and maybe LG has had to pick its battles this time round, but from last year’s audio visual all-rounder that we enjoyed so much, the LG G6 falls short of our expectations.