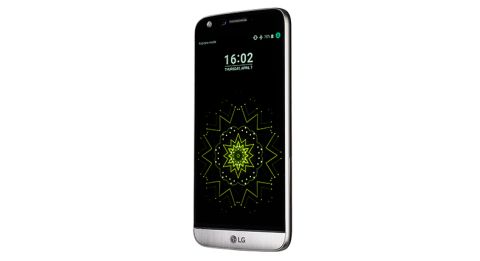 Innovation and performance – just what a smartphone needs

Smartphones don’t tend to change much every year, but the folks at LG are mavericks who refuse to play the game of incremental updates.

The LG G5 flips the table over with some huge developments: a dual-lens camera offers wider angles than the eyes can see, while an innovative modular design lets you add components yourself, including an upgradable DAC.

It’s refreshing to see an entirely new design, rather than facelifts of old ones as is often the case with Apple and Samsung. The G5 is a completely new model, with a chassis made of metal this time, although at 159g it is light enough to make you think otherwise.

Build quality is good, not as luxurious as the Samsung Galaxy S7, but it’s nice to hold and feels sturdy nonetheless.

There’s a slight ridge between the edges and the back panel which LG calls the ‘Shiny Cut’ edge. That makes it literally less seamless than the iPhone 6s but, if anything, this helps with grip and makes it feel less likely to slip out of your hand.

LG were pioneers of back-mounted buttons, but now the volume keys have moved to the left edge. The power button remains on the back, doubling as a fingerprint sensor. The placement still works – it sits just where your index finger is likely to rest.

On the right edge, the much-loved microSD card slot returns and is built into the SIM card tray, with support to boost the 32GB on board storage by up to 2TB.

Another returning favourite feature is the ability to swap batteries. But how do you do that with a metal unibody design? The solution is a neat one: a button on the lower left edge ejects the bottom of the phone.

This allows you to swap out the battery whenever you need, as well as upgrade the phone with extra components.

The battery doesn’t have the stamina of the Samsung Galaxy S7, but easily lasts a whole day. It charges quickly too; we managed to get from 23 per cent to 100 per cent in just 20 minutes.

As for software, LG has again put its own interface on top of the stock operating system (Android 6.0 Marshmallow). As usual it is helpful and intuitive, with the exception of the complete removal of the app tray.

Your apps now sit on multiple home screens, similar to the iPhone. That's sure to divide Android stalwarts, but LG has confirmed that the app tray will be brought back as an option via a software update.

Under the hood of the LG G5 is Qualcomm’s latest Snapdragon 820 chipset, with 4GB RAM supporting it. It is fast and responsive, with no waiting around between apps and no lag when swiping or multitasking – even rebooting after removing the 2800mAh battery is superfast.

The LG G5 shrinks the screen down a notch from its predecessor, from 5.5in to 5.3in, but keeps the same QHD (2560 x 1440) resolution, which means 554 pixels per inch. It’s a crisp, sharp screen that looks gorgeous, with a natural colour palette and brighter colours that pop without verging on psychedelic.

The contrast looks very good for an LCD screen. Blacks are deep and whites look pure and bright. The iPhone 6S has more brilliant whites, but the LG counters with slightly greater detail and subtlety.

The display now features an optional ‘always-on’ mode, displaying handy information like time, date and notifications without needing to wake the phone. LG says this uses around 0.8% battery per hour – much less than would be drained by the 150 times that the average person checks their phone for this information in a day.

Finally, brightness has been given a boost to a dazzling 850nits – around double the brightness of the LG G4 – thanks to the new Daylight Mode, which really helps when using the G5 outside.

Even better, it detects surrounding light conditions and automatically increases or decreases the brightness to suit.

LG was the first manufacturer to feature high-resolution music on a smartphone with the G2, and the G5 continues that tradition with a built-in 24-bit DAC.

It’s also the first phone to support Qualcomm’s aptX HD for lossless Bluetooth playback, although we are awaiting the arrival of some aptX HD headphones before we can test this.

The sound through headphones is good, but not amazing. You get a good tonal balance and plenty of detail whether you listen to Spotify or CD-quality WAVs, and there’s a lovely delicacy to hi-res tracks.

However, the timing could be better and dynamics stronger. It’s a perfectly enjoyable listen, but not one that truly engages or entertains.

But this is where the G5’s modular design comes in. The bottom of the phone slides out, leaving a space for components to improve specific areas.

Here, it’s LG’s Hi-Fi Plus module, developed with B&O Play – a dedicated DAC and headphone amp with its own headphone jack and support for hi-res playback up to 32-bit/384KHz. Once connected, it feels like part of the phone, sitting flush to the body and only adding a few millimetres to the design.

Compare the G5’s native sound against that with the added component, and the results are spectacular. Whether it’s our own hi-res tracks or CD-quality downloads from Tidal, it sounds significantly better with the enhancement.

It easily fixes the G5’s faults, providing hard-hitting dynamics and injecting a few doses of espresso for good measure.

It still doesn’t reach the puppy-on-Skittles energy of the iPhone 6S offers, but it is exciting. On top of that, the enhanced G5 is so detailed, subtle and composed that it makes the Apple seem like a blunt instrument.

What a difference this is. The default G5 sound is what we would call lackadaisical, which drags down an otherwise stellar smartphone. But when armed with the Hi-Fi Plus module, the G5 is so good we would happily put it in the same bracket as some dedicated hi-res music players.

LG is yet to release the price information officially, but the Hi-Fi Plus module is listed at a reputable retailer for £150. We think it’s worth every penny.

LG’s main rear camera comprises two sensors – a 16MP sensor with the regular 78° lens and an 8MP super wide angle one with a whopping 135° lens. Not only is that wider than the field of vision than the human eye, but also around 1.7x wider than any existing smartphone.

You can switch between these easily in the menu, plus there are a few modes that allow you to use both lenses at once, like Pop-out Picture that creates a picture-in-a-frame effect.

There is also a full-fledged manual mode with the option to tweak things like ISO, shutter speed and white balance, plus the ability to save your images in RAW format. That microSD card slot will certainly come in handy.

The camera is another area of the LG G5 that can benefit from the modular design. LG Cam Plus module works as a camera grip for easier one-handed snapping. It packs zoom, video and shutter controls, as well as offering an additional battery capacity of 1200mAh for longer shooting times.

The main camera features a laser for accurate focusing and optical image stabilisation for shaky hands. It takes sharp, vibrant pictures even in dim light – not quite as sharp as the Samsung Galaxy S7, which also deals with the dark a little better, but the Samsung’s photos look more processed, sometimes giving the sharpness an over-etched quality.

The super-wide camera doesn’t have optical image stabilisation. But that’s a small hit to take considering its wonderful wide angles. Backing up to fit subjects in frame just became a thing of the past.

The LG G5 is a fantastic bit of kit. It’s not as slick as the Samsung Galaxy S7, but it is just as capable. And we give LG full marks for innovation. That camera is a joy to use, and the modular components are a brilliant idea that we hope will get more attention.

Then there’s the Hi-Fi Plus module, developed with Bang & Olufsen. We’re very excited about it, because it supercharges the G5’s sound, taking the phone from what would have been a four-star rating up to an easy five stars.

A great picture, a great camera and superb sound quality – the LG G5 with Hi-Fi Plus by B&O Play may be a mouthful, but it is the complete package.

See all our smartphones reviews