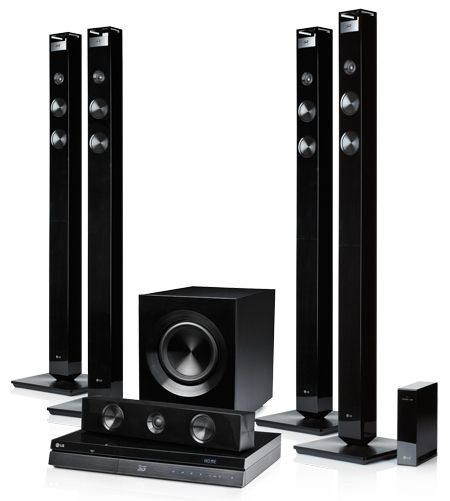 If the size, style and wireless speakers appeal, this is an enjoyable system

It wasn’t long ago that £600 was about the going rate for a standard 5.1 home cinema system. Five small speakers, often of questionable quality, a subwoofer with chipboard finish and a basic head-unit for playing discs seemed more than enough for your money.

Nowadays you can get a top-of-the-range all-in-one system with a feature list as long as your arm. LG's BH9520TW, which heads-up LG’s extensive range of home cinema systems, is one such set-up.

The first thing we notice about this system is that it claims to be ‘9.1’ – yet there are a standard five speakers (four tallboys and a slim, small centre) and a subwoofer.

The extra channels come from the upward-firing drive units at the top of each of the four floorstanders.

The rear speakers are wireless. Well, they’re free from the main unit at any rate – you do need to wire them to the wireless receiver box. This in turn requires mains power in order to talk to the main unit. So it’s not completely wire-free.

LG BH9520TW: Set up
The system takes a fair amount of setting up. The tower speakers come in two parts, which screw together and then screw in to a circular base stand to form a (fairly) solid floorstanding speaker.

The centre, sub and main unit are much more par for the course in terms of dimension.

Inside the box there’s plenty of tech, too. Wi-fi is built in so you can connect to your network wirelessly (a wired connection is also possible) and then access a decent array of LG smart TV content including BBC iPlayer, YouTube and Facebook, plus more movie streaming sites than you can shake a stick at in the form of Acetrax, Blinkbox, LoveFilm and Netflix. You can also stream content from your own devices.

LG BH9520TW: Tech specs
Two HDMI inputs (there’s one output), a USB input that can play video and is made for iOS devices, plus auxiliary, portable and digital audio optical inputs ensures all your bases are covered, and there’s Bluetooth audio streaming and an FM radio too.

An intuitive interface makes it simple to navigate and use. The smart TV section is clear, although dividing ‘premium apps’ – essentially, the big names such as iPlayer – and ‘LG apps’ seems a little weird.

LG BH9520TW: Picture quality
Lest we forget, it’s a 3D Blu-ray player at its heart. And the pictures it delivers are excellent. Watching Terminator 2: Judgement Day, motion sometimes blurs a fraction, while the colour balance is natural but dynamic.

Black levels are solid and there’s an impressive amount of detail. Upscaled DVD pictures are dealt with impressively too, revealing pictures that are free of noise, and colourful.

The film soundtrack is sparse by modern standards and shows the system is capable of good detail and steering. The four tall speakers integrate well and make for a fine sense of immersion, while the sub interjects coherently with solid bass.

LG BH9520TW: Sound quality
Dialogue is reasonably clear but there is a shrillness to certain treble notes, even at moderate volume – most notably when the action ratchets up a notch.

It’s capable of decent dynamics and excitement but we’re surprised it doesn’t sound a little bigger, considering the speaker package’s size. Turning 3D sound on fills a room more effectively but you do lose clarity.

LG BH9520TW: Verdict
The LG BG9520TW makes a good stab at justifying its price: the wireless speakers work flawlessly, as does streaming via Bluetooth or wi-fi, and the on-demand content is great – as is its picture. Only the sound, and the value on offer from cheaper systems, cause us to qualify our praise.