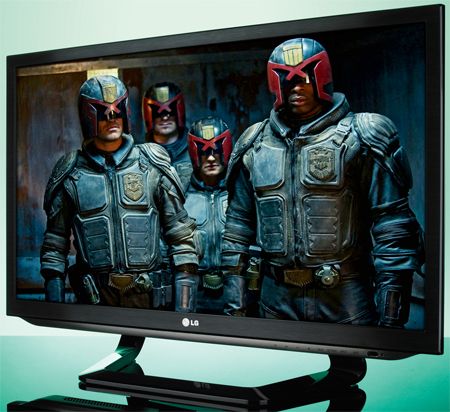 The LG is a good effort, but faces tough competition

We’ve long sung the praises of LG’s approach to 3D, with its 42LM660T serving up one of the smoothest experiences we’ve seen thanks to its easy-on-the-eye passive 3D tech. We hope this LG 32LM620T 32in set excels, too.

Play Scorsese’s Hugo and it’s good news in terms of detail and depth, but fast-moving scenes also show up some slight motion issues.

These are present across standard-def TV and Blu-rays too, but it remains the only significant flaw in LG’s otherwise clean, detailed and bright images. (We’re usually loath to turn on image processing modes, but set LG’s TruMotion to Smooth, and it does smooth out some of the instability.)

The Blu-ray set of Joss Whedon’s Firefly is a great test of contrast, black depth and detail, with so much of it being shot in the dark interiors of the ship Serenity.

The LG does a great job in all cases – there’s plenty of detail in shadowy corners, and textures are rendered with a realistic touch. Whites are clean, although they can glare a bit (which can be subdued to a certain extent with the backlight and contrast controls), and the colour balance is neutral next to the likes of Panasonic's TX-L32ET5B and Samsung's UE32ES6800.

LG’s settings menu lets you choose between picture modes including Intelligent Sensor, which aims to adjust the brightness and colour characteristics of the screen based on your room’s lighting conditions, but does tend to skew any fine tuning you’ve already done.

We always use a THX optimiser disc to fine-tune TV screens, but we usually find that leaving all modes in ‘Standard’ and turning off features such as dynamic contrast and super resolution gives you the best picture.

Switch to standard-def TV and the LG’s neutral colour palette is much appreciated, especially with colourful shows such as The Big Bang Theory. There is a hint of noise (although HD channels are much cleaner and brighter), but fiddling with the noise-reduction clears up the issue a little without spoiling other aspect of the image.

Flatscreen sound is usually pretty awful, but this set isn’t nearly as harsh and tinny-sounding as most, with dialogue in particular sounding clear.

LG also continues to provide one of the best on-screen interfaces. The programme guide is quick to respond, and there’s a picture-in-picture view for when you’re scrolling through the input list, or through the host of on-demand music and video services and apps in LG’s My Apps section.

A nice touch is a pop-up menu that you can call up at the bottom of the screen, which gives you easy access to all menu options.

We wish the standard remote was better laid out, as it’s easy to accidentally hit the Home button when using the middle control buttons. If that irks too much, though, you can use LG Magic – a free smartphone remote app – which is a much slicker affair.

All in all, this LG is a good looking set with well-balanced picture quality. Despite its issues with motion, it’s well worth an audition.