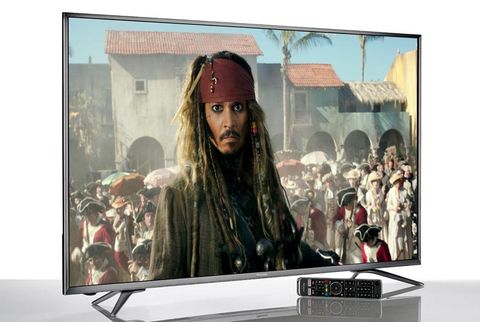 This Hisense promises much, but fails to inspire

“Dress for the job you want, not the one you have”. Unless you turn up at your accountancy firm in a Batman costume, it’s generally good advice

The Hisense H50N6800 is certainly dressed for the part. Also available in 55in and 60in versions, this 50in version offers a middle-market alternative to the big four’s TV offerings.

On paper, the H50N6800 seems to tick all the right boxes: it has a 4K screen and smart functionality, as well as ULED and HDR Plus technology – which sound similar enough to OLED and HDR to seem impressive in the showroom.

However, in practice, the Hisense doesn’t quite meet its big ambitions.

ULED stands for Ultra LED, an umbrella term for a number of technologies that improve the picture quality of ‘normal’ LCD sets.

HDR Plus, meanwhile, is a form of High Dynamic Range for televisions with a brightness of at least 400 nits (the N6800 reaches 450 nits)). However, it’s notably different from the 1000 nits necessary to be considered an Ultra HD Premium set.

On the software side, the way that the Hisense handles streaming services is enjoyably simple with a proprietary operating system called ‘VIDAA U’.

Pressing the Home button on the remote overlays a row of apps in the middle of the screen, while keeping whatever you’re watching playing in the background.

It’s customisable too; if you’re an Amazon Prime subscriber but don’t have Netflix, you can set it up so one appears before the other.

BBC iPlayer, YouTube, and Wuaki.tv also come pre-installed, with the last two having dedicated buttons on the remote (as does Netflix).

Catch-up services from ITV, Channel 4, and Demand 5 are absent, but Hisense says that a future update will add them, along with Freeview Play functionality, to the platform.

The remote itself is nice to hold and the channel buttons have a good texture, but the plastic, clicking sound they make means it’s a little less appealing to use.

Thankfully it also supports something called Anyview Cast, so if you have an Android phone you can stream content to the TV.

Despite the budget price tag, the H50N6800 is pretty stylish. It has a nice border of metal between the screen and the frame, and while the back is plastic, it’s solid and substantial.

Off the top of our heads, it’s difficult to recall a modestly-priced television that looks better than this. There are four HDMI inputs. Two of which are HDMI 2.0 and two are HDMI 1.4.

For movie watchers, this won’t make much difference, but gamers will want to make sure their 60fps games are going through the HDMI 2.0 input. There is also an ethernet port, an optical output, RCA plugs and three USB inputs.

Having set up the TV for our testing room by turning Dynamic Contrast on Low and toggling the Local Dimming mode, the N8600 puts out a decently crisp picture when a scene is lit well.

Watching Wet Hot American Summer: First Day of Camp on Netflix, there’s a decent amount of detail to the water in the lake and the bright red wood on the side of each cabin. When the camera moves closer, there’s enough insight to show the strands of hair on Coop’s ill-fitting wig to emphasise the ridiculousness of the show.

Skin tones are natural, provided you leave this TV’s colour temperature on Standard; changing to either Warm or Cool puts the palette on the wrong side of convincing.

It’s pretty colourful, contrasting greens and blues clearly, but there is room for improvement. We’d like a little more subtlety, as it isn’t a particularly nuanced colour range, and bright lights cast on character’s faces don’t have enough gradiation to look realistic.

What does let this TV down, however, is the way that it handles black detail. Watching Better Call Saul, when the criminal lawyer meets in a gloomy car park, the shadows behind the characters are completely opaque – not even hinting at the texture of the concrete behind them.

On occasion, it’s difficult to make out a dark shirt from the background. While it’s impressive that the N6800 can reach such levels of black, it’s not refined enough to ensure you get the most texture out of it.

With most TVs, we’d recommend getting a good soundbar for a higher quality of music, and the N6800 is no exception. But to their credit, the in-built speakers are full-bodied and relatively thorough.

Watching Life of Pi, the splash of the waves and roars of Richard Parker are nicely balanced and there’s an acceptable amount of dynamism.

It can’t quite capture the crunch of fish bones being eaten by the tiger’s powerful jaws, and when you turn the volume up loud, there’s a hard edge to the treble that emerges, but on the whole it’s not bad.

The Hisense H50N6800 may look the part, but like many a snappy dresser, it’s fallen a little too much on the side of style over substance.

It’s easy to use, sounds solid, and is well detailed when the picture is bright, but it needs more sophistication all round to really make its mark.

See all our Hisense reviews