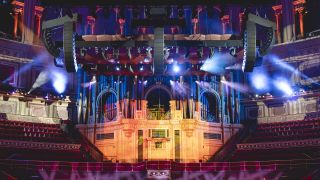 There used to be a quip that the Royal Albert Hall in London offered the best value for money of any auditorium in the world, given that concert-goers got to hear the music twice.

Though the observation was tongue-in-cheek, little had been done to improve the acoustics since the introduction of the iconic ‘mushrooms’ that have hung from the hall’s domed ceiling since 1969.

That is until now, when a £2m sonic refurbishment has transformed the sound from what is arguably the world's most famous stage, thanks to the largest ever loudspeaker installation in a single room.

Miraculously, the six months of overnight installations didn't impact upon a single one of the 327 individual events scheduled over that period, as more than 15km of cabling was fitted to connect 465 permanent d&b audiotechnik loudspeakers to 73 four-channel amplifiers, then all tuned to suit their tricky new environment.

It is the first time dedicated speakers have served those seated in the circle, the gallery and the hall’s 144 boxes, with the building’s Grade I listed status adding yet further hurdles to what was already to be a marathon undertaking.

The work began with Sandy Brown Associates, one of the world’s leading independent acoustic consultancies, which intricately mapped out the room and its sonic characteristics and idiosyncrasies in order for renowned German company d&b, who won the contract to supply the new hardware, could set about designing the ideal system for amplified shows.

“The Royal Albert Hall presents a system designer with some of the most unique geometry in the world,” says d&b’s Steve Jones. “It was essential that the final audio system design delivered a significant improvement to the amplified sound in this venue.

“Using the latest 3D modelling and simulation techniques, we were able to pinpoint exactly how, where and what speakers we needed to install – maximising the clarity, intelligibility and musicality that the audience expects from a world class venue,” Jones adds.

The result is that seats in the circle now represent some of the best in the house, while the once practically dead boxes feel less removed from the action thanks to speakers installed at the front and playing ambient reverb from the rear.

Regarding the latter, engineers can feed in subtle reverb modelled on some of the most famous concert halls around the globe to help remove those sonic barriers between ticket holders here and those in the rest of the auditorium.

World-class sound to match the venue

And so it transpires. A simple A/B test with those in-box speakers first switched on, then off, proves the venture is indeed worthwhile. Though the difference is subtle, and will undoubtedly reveal itself more over the course of a concert than during the short demonstration we were treated to, the deadening effects of the box are clearly less intrusive on a performance.

As for those seats out in the open, something near uniformity has also been attained across the hall’s trio of tiers. The seven circle delay arrays aid not only in timing as the sound reaches the outer edges of the room, but in ensuring the same quality performance is heard by those at the back as is by those where the seats turn back on themselves; a difficult manoeuvre when you consider this theatre’s circle really is circular in shape.

The largest continuing conundrum facing the team, though, is how it might further improve the gallery. It is by far the liveliest section of the Royal Albert Hall, as the echo of footsteps as you walk around it demonstrate. It is also set back with hard walls and a floor with no soft furnishings. So, how to offer as close a performance to that of the rest of the hall without losing too much of the atmosphere that makes it many visitors’ favourite position?

The suggestion is that drapes will be used to break up the space and add uneven, soft surfaces to stop the sound pinging around so much. The new dedicated arrays certainly direct the sound better to this top tier, but, though rarely will the gallery be as empty as during our tour, it seems to be agreed some damping will give scope to further improve the sound in future.

Those sonic improvements felt by the audience will be further amplified by the help this new system offers the sound engineers using it. “Previously, our control over the audio experience was limited and often didn’t meet our high standards,” says Ollie Jeffery, head of the site’s Production and Technical department. “What we wanted was to bring sound in-house with a properly implemented system and make it so good that the majority of productions would feel comfortable using it.

“Naturally everyone who has ever played here wants to get it right; some audio teams would spend five or six hours on the day taking speakers up and down trying to achieve that, but it was always a compromise. It wasn’t that our service providers were doing anything wrong, but we felt the difficult challenge of delivering world class audio within the extremely demanding geometry of the room, could only be met with a different approach.”

We were impressed by what we saw and heard – even more so when we treated ourselves to the full experience a few weeks later. Listening to Carl Craig and Chineke! Orchestra – a fitting example of the Royal Albert Hall’s forward-looking programme – deliver a fresh combination of electronic beats, bass and rhythms with the stirring sounds of a full orchestra, it’s clear the room has been transformed into something extra special.

Voices are clear; strings attack but avoid sounding too bright; deep, angry bass notes stay tight and punchy. Large-scale dynamics have surely never sounded so roomy, yet at the same time, so organised and precise, in line with the conductor’s staccato command.

The architecture of the ancient auditorium has never been in question, but now the sound is every bit as jaw-droppingly inspiring. Prince Albert himself would be proud.