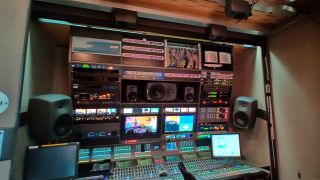 Most of us will have seen Black Mirror and wondered how far away we are from surveillance implants, eye-tracking adverts and virtual transportation. Until the latter is achievable, the best way to see live performances at a music festival without attending is to tune into live broadcast coverage mixed in Dolby Atmos surround sound in the comfort of your own home – no portaloos, no mud, no overpriced beer.

Atmos has become a staple in filmmaking and cinema-going in recent years. Since 2012, hundreds of films have been mixed in the technology, which is supported by an increasing number of video services (including Netflix, Apple iTunes and Amazon) and devices, from soundbars to AV receivers. There are music mixes in Atmos, with presumably more to come under the forthcoming Dolby Atmos Music project, too.

But in the more demanding domain of live broadcast, the technology has largely been confined to the many football matches Sky and BT have shown over the past two Premier League seasons.

The roads are being mapped, however. For the second year in a row, Sky broadcast the UK’s Isle of Wight music festival in Atmos through its 4K UHD service on Sky Arts and Sky One channels, allowing Sky Q subscribers who own Atmos-supporting home cinema systems and soundbars to hear the live acts in a more immersive way.

“The best thing is to be here, but if you can’t be, then with Dolby Atmos we can capture that feeling,” says Kevin McCue, Sky’s head of technical innovation and facilities. With Sky Q’s on-demand service now hosting the highlights, full band performances and additional content in Atmos UHD, we spoke to McCue, as well as Jason Power, senior director of Dolby’s Commercial Partnerships and Standards division, about broadcasting live in Atmos.

“Compare the broadcast here to that at a football or sport event and it’s actually very different. It’s a different creative process, the environment is different: it’s fast-changing, unpredictable and dynamic. A set-up for football is pre-rigged, and largely the same from stadium to stadium. They may have a different acoustic character, but it’s largely predictable,” says McCue.

“You can take two approaches to doing entertainment and music: live or post-produced. In post-produced space you have infinite possibilities in what you can achieve… it’s a well-oiled machine. Whereas in a live environment it’s limited to a certain extent. It’s changeable, the crowd could be dead – which you can’t cheat because it’s on camera. If it looks small, it is small.

“There’s more interest in the industry about exploiting Atmos, I think artists involved in post-produced content are aware, such as Imagine Dragons and the Foo Fighters,” says Power. “But in a festival line-up, it’s bus in, bus out. It’s less considered. We have to be mindful that we’re observing, rather than orchestrating something.”

“Last year was the first time we tried this. We took a literal approach to where we put the microphones and what we thought we wanted to capture. And whilst it worked, in retrospect there was a lot to learn for this year. Last year we got an immersive experience to a certain extent, but now, instead of having this wash of crowd above, what we’re trying to do is point out little clusters of people in the crowd. It’s more immersive because of the whole structure of mic placement.

“An array of microphones has to, for the most part, sit on a lateral plane. If we were to put a load of microphones at a front of house position to try capture crowd at the back, that’s not going to work because by the time the sound has got there it’ll be delayed. The sound hitting the front of stage mics would reach those [rear] mics 40 milliseconds later, and you’d end up with a train station effect. Because of the live environment we can’t realign sound to meet that plane, so you stick to one plane.

“We’re running about 16 audience mics, whereas historically you’d get away with three each side. You can’t have something in the 5.1 plane that exists in the height plane, as the minute you hear something in both, the brain goes 'I’m not interested'. We’re creating unique [sound] for each of the speakers, and in doing that, it naturally has this staccato feel to it.”

“We see a tremendous hunger from audience to have a better, bigger, more realistic sound experience," says Power. "But people want to do that in various form factors and different amount of money. We want to make Atmos accessible at every price point and every form, to ensure you have the best experience.”

Enter the more accessible and affordable Atmos soundbar, such as the class-leading Sony HT-ST5000 – because not everyone can accommodate and afford a ceiling-compromising, speakers-everywhere package.

“We’re trying to create an experience for the most,” said McCue. “What we’ve seen with Atmos soundbars is that our mic placement and EQ for height speakers is a lot sharper than for a discrete system. We’re trying to give the soundbar experience a fair crack at being immersive by making things a lot spikier and sharper, so it has a chance to bounce around a room.”

“But people with full systems won’t lose out. They’d get the exact experience we’re monitoring in the truck. We’re happy with this in its environment. But if we make objects sharper, things will sound clearer. We’re trying to find a medium."

“From an Atmos soundbar right the way through to a discrete 5.1 rig with up-firing speakers, everyone’s getting something they didn’t have before," says Power.

“We’re fully committed to making better experiences for customers that want them, so we get it right for most and push the rest,” adds McCue.

Because you can’t just take a PA mix and pop it straight out onto the TV, the music is mixed and monitored live, in real-time, by an engineer on a music console in, as McCue puts it, “a recording studio on wheels”.

“The sound from the microphones comes off stage and into the sound truck. Most sound consoles aren’t Atmos aware, so they don’t understand objects and renders and heights. But consoles have been made to make Atmos work, taking a 5.1 main output and linking that to a four-channel independent output that drives height speakers. So when you turn the volume up or down, you’re doing that together.

“We’re monitoring in Atmos 5.1.4 (with four height channels) in a sound control room in an outside broadcast truck. And our signals go back to Sky via satellite trucks... Sky has invested in a new Atmos mixing theatre that’s far more accurate.

“For UHD, we transmit our picture in four quadrants, stitched together to make UHD image. For 5.1 customers we’re creating a Dolby Digital-based 5.1 mix that travels in one of those quadrants. For Atmos customers, we’re – and I’m paraphrasing here – making a Dolby Digital+ track in another quadrant. They travel in tandem together, they follow in a parallel route. In your set-top box, that’s when you choose: Dolby Digital or Dolby Digital+."

“We don’t have time to change bits either, as you only get 30 days from when the artist goes on stage to when you have to take it off your VOD platform. Given it’s UHD, and the time it takes to get UHD on our platform, we’re running drives back overnight trying to get them to the plant and on the platform. If we see something wrong we can fix it, though.”

So how does it sound?

“If you’re watching something on UHD service in Atmos, you’re getting excellent pictures and a sense of things going on around you as well as in front of you. It’s not supposed to make you think there’s dialogue behind you – that’s what happened with 5.1 initially, before it evolved. It should simply lock you in to what you’re watching. The band is mixed predominantly live in 5.1, while the audience fills the heights. We’re not generally putting band in height as it may compromise the 5.1 Dolby Digital mix,” says McCue.

All of that’s great in theory, but does it really work? As promised, the Atmos mix transports you into the crowd much as it does when watching football. In fact, we’re inclined to suggest that the upgrade to Atmos audio has a more transformative effect than the upgrade from HD to 4K – you feel as if you’re part of the show rather than simply viewing from afar a crisper version of it.

Dolby’s talk of tailoring the delivery towards Atmos soundbars initially makes us concerned that the sound might be brittle through our dedicated 7.1.4 system, but that’s thankfully not the case – this is a smooth delivery with controlled treble. It feels as though the sound has been dynamically compressed a little, possibly to suit the limitations of a soundbar – the chaotic Idles set lacks a little of the expected impact. We were expecting a bit more bass, too.

But that’s nit-picking, because until virtual reality gets its act together, this has to be the best way to enjoy a music festival, without actually braving the mud yourself.

Inside the UK’s first Dolby Cinema: 400 speakers, Dolby Atmos and a Compton organ