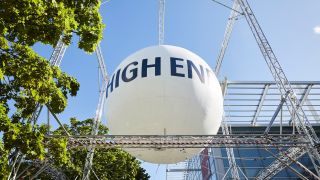 If there's one good thing about Munich High End 2020 being cancelled (bear with us here...) it's that it gives us a chance to take stock and really get the measure of what has fast become hi-fi’s favourite show.

Rather than always looking forward to the shiny and the new, we can look around us at the right now and see what became of those bright young things of the previous year. Did the class of Munich 2019 live up to all the hype? What turned out to be the real high-end success stories?

We’ve leafed through all the launches and announcements from High End Munich 2019, cross-referenced them with our catalogue of reviews of the last 12 months and underlined the names of the real winners of last year’s show.

Whether you’re interested in making a purchase or just wondering what to look out for at High End Munich 2021, the success stories from 2019 are well worth a scan.

Sitting above the legendary Diamond series, the Wharfedale Evo 4 range arrived in 2019 to set a new bar at the mid-level price point price. Comprising two bookshelf speakers, two floorstanders, a centre and a surround sound speaker, it was the top-end, three-way Wharfedale Evo 4.4 floorstanders that we called into our test rooms. They did not disappoint.

They're finished in a choice of black, white or walnut and are built with both an Air Motion Transformer for the top notes and, unusually, a 50mm soft dome for the midrange. They're backed up by two bass drivers and a downward-facing port.

The results are some large scale sound with a superb sense of authority. They're both dynamically insightful and articulate enough to make the most out of even busy compositions.

While they might not grab you instantly, as some rivals do, they're entertaining and detailed with enough in the way of refinement to make them an excellent long-term choice – What Hi-Fi? 2019 Award-winners for Best floorstanding speaker (£1000-£1500).

Part amplifier, part music streamer, the Arcam SA30 is a superb piece of modern hi-fi kit. Just add speakers and it's a tidy wireless music system to rival the best.

It's stacked with connectivity (Chromecast, AirPlay, UPnP streaming) and with 120W per channel, it can cope with suitable speakers. Most importantly, though, the sound is a treat. It has a deliciously easy-going nature and a particular penchant for vocals.

It may not be total perfection – the app isn't the best and it doesn't have Bluetooth – but it's mature, open and clear. If that's your bag, then keep your eyes peeled for more from Arcam at Munichs to come.

There's no need to get caught up trying to work out exactly how to classify the Naim Mu-so 2. It's a really tasteful and convenient piece of home audio for modern living, and that's good enough for us.

There's an HDMI ARC for use with your TV, USB, optical and 3.5mm ports, but the wireless music streaming options are likely to be used more often. It streams through Tidal, Spotify Connect, AirPlay 2 and Chromecast, with file support up to 32-bit/384kHz. And, while the app that comes with it is decent and the on-device touch controls are a delight, it also happens to be Roon Ready.

Sonically, it's just as rich as its excellent predecessor, but delivers even more detail, dynamics and rhythmic dexterity. Wireless speakers may not be right at the core of hi-fi, but it was a fittingly high-end launch for Munich 2019.

Dali was no stranger to AV sound when it launched the Katch One at Munich 2019. The Dali Kubik One had already won What Hi-Fi? Awards, but it felt like time for a refresh.

We hoped from its distinctly non-home cinema look and feel that there was something special about this soundbar – and there certainly is. The slightly awkward shape means that you can't just pop it at the feet of your flat screen, but it also makes room for a set of four 9cm aluminium mid/bass drivers, four 11.5cm steel passive radiators and two 21mm soft-dome high-frequency units.

The results are some of the most brilliant subtle sonics and dynamic clarity you'll find beneath £1000 in this category. Those hoping for Dolby Atmos, external subs and other baubles will be disappointed, but get one home and you won't regret it.

A Product of the Year gong at the What Hi-Fi? Awards 2019 makes it arguably the most successful Munich 2019 launch on this list.

Think of DACs and Chord Electronics may spring to mind, but the Huei phono stage was launched as part of the company's 30-year celebration of its time in analogue amplification. Built into the similar-looking and distinctive chassis as its digital range, the Huei offers options for both moving coil and moving magnet, and plenty of granular control for both gain and impedance.

It delivers sound with good dynamism and stability, and an easy-on-the-ear quality which won't grate no matter how long you listen for. While it's not quite class-topping for dynamism and expression, it's still a solid and insightful performer and a worthy arrival from Munich.

This was the first wireless speaker we tested from the Japanese audio firm and we'd certainly be happy to do so again. The name sounds like a Star Wars droid, and with its UFO looks and lighting, there's definitely something sci-fi about the appearance.

But instead of little green men, on the inside there are five drivers (two tweeters, two woofers and a cone subwoofer) driven by a digital amp that aims to reduce jitter and noise from the driver performance.

Its sound is big and solid, and it can pump out some powerfully tight rhythms without swallowing up the rest of the track. There's no scrimping on detail or dynamics, no matter what kind of music we throw its way over Bluetooth, aux-in, optical, USB, internet radio and Chromecast.

If it wasn't for occasional bugs in the software during our testing period, the C30 would have picked up a five-star review. Sonically, it's right up there with the best.

For a portable music player, the Kann Cube isn't particularly portable – nor is it cube-shaped. It's a player with built-in storage, a DAC, a headphone amplifier and, with its five-pin mini XLR connection, it's a great fit for desktop or hi-fi system integration.

There are, of course, balanced and unbalanced connections for headphones or other hi-fi kit, as well as 128GB of built-in storage and a microSD slot which can cope with a 1TB card. There's file support up to 32-bit/384kHz, DSD256 and it's MQA-enabled through Tidal Masters as well as downloaded files.

The sound is typically high-end too – with great clarity, wonderful scale and layers of nuance. The only problem is that the even better A&K A&ultima SP1000M isn't much more expensive.

The best of old hi-fi combined with the best of the new – that was our verdict on the affordable and stylish Linton speakers, yet another Wharfedale five-star success story from High End Munich 2019.

Fans of retro-style hi-fi will love this classic-look speaker. They're built with a broader baffle and bigger drive units to produce a more open, larger-scale sound that's different from anything produced by today's more compact standmount speakers.

With effortless weight, spot-on stereo imaging and lots of detail, you could listen to these speakers for days and still not get tired. Just remember to change the record once in a while.

Today's best Wharfedale Linton deals
Amazon AU View Similar
Amazon
No price information
Check Amazon
We check over 130 million products every day for the best prices
No comments yet Comment from the forums
What Hi-Fi? Newsletter