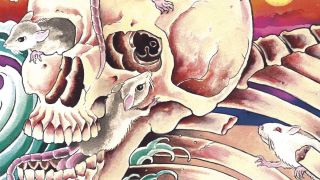 As the decade draws to a close, this year has been a last chance for artists to post entries to the ‘albums of the 2010s’ lists that will inevitably litter the internet from this moment forward. Hey, we’ll probably even write one ourselves.

You can be sure, too, that some of the words for that article will be regurgitated from what you’re about to read. Because, despite what your stepdad says every time he has one too many IPAs, 2019 has been a sterling year for recorded music.

The ten records we’ve chosen here are not just our favourites from the past 12 months, though: above being thought-provoking sonic arrangements, packed with artistic endeavour, they have that rare ability to surprise you with hidden ornamental lines and growing impetus the better the hi-fi system they’re afforded.

If you’ve been listening to any of these through the built-in speakers on your smartphone, may we suggest an immediate and groveling apology to the artist on Twitter.

In many cases, the resurgent popularity and influence of techno in the past decade has brought with it a stiffening of the parameters that define it as a genre. Not so for Sam Barker. While scores of zeitgeist-hunting producers have made do assaulting our speakers with largely formulaic releases, this Berghain resident has experimented with subtly changing minimalist chord patterns – last year with his Debiasing EP and in 2019 with the album Utility – that relinquish driving rhythms in lieu of something that somewhat belies the genre as it’s been put to us.

Listen to Utility by Barker on Spotify and Tidal

Utility by Barker on Amazon

When Judgment Day comes, Justin Vernon will undoubtedly need to answer for his music’s unwitting aid in the rise of the 'softboi' – the condescending, pseudo intellectual that has given birth to tens of thousands of memes while forlornly accepting his self-prescribed responsibility as gatekeeper of culture. What will get Vernon off the hook, however, is the combination of aching beauty and sprawling experimentation present in his body of work with Bon Iver. Frighteningly, i,i is proof that he may not yet have even reached his peak.

Listen to i,i by Bon Iver on Spotify and Tidal

i,i by Bon Iver on Amazon

The most surprising thing about Crush is that it took only five weeks to complete. Not because it’s so admirable a body of work – though that in itself makes the timescale impressive – but because Sam Shepherd is rarely one to be so off the cuff. Elaenia, his 2015 debut as Floating Points, took five years to produce, and such dedicated attention to detail has been present throughout his decade-long career – perhaps unsurprising for someone who achieved a PhD in Neuroscience a few years ago. But Crush is the product of a tour spent improvising a raucous opening for The xx, and feeds some of his original club energy back into a collection of still pensive and affecting electronic pieces.

Listen to Crush by Floating Points on Spotify and Tidal

Crush by Floating Points on Amazon

It’s galling to think that Dave is still only 21 years of age. He was far from an unknown quantity ahead of releasing his debut album this year – with his punctuated delivery of often wryly humorous, always self-aware social commentary already having elevated him to semi-stardom with a list of singles and EPs – but PSYCHODRAMA is undoubtedly on another level. Indeed, it is on another level to much of what has come before it generally. His wordplay is such that references will still be being unearthed long after their cultural significance is lost, but it is toned down somewhat in an important collection of songs exploring what it means to be young, black and in tune with the fragility of mental health in today’s fractured UK.

Listen to PSYCHODRAMA by Dave on Spotify and Tidal

PSYCHODRAMA by Dave on Amazon

Certainly there is little novel about a band or artists releasing more than one album in the space of a year, but rarely is our decision of which to include in an article such as this made so difficult. When we’re talking about tests for your system, though, it makes sense for Two Hands to win out. In some contrast to U.F.O.F., Big Thief’s second record of 2019 witnesses the band playing live and unadorned, with minimal overdubs; it often feels as if a step toward the speakers could take you into the band’s circle, a centrepiece of their restrained yet emotive composition.

Listen to Two Hands by Big Thief on Spotify and Tidal

For a record so entrenched in technology and algorithm, replicr, 2019 is quite remarkably alive. Though if there’s a band you can trust to balance on that particular tightrope, it is undeniably 65daysofstatic. Software has more or less become a member of the group in its own right over the years, and it is sometimes the harnessing of it you hear on this record more so than the band being in full control of its output. Referring to the piece Trackerplatz, 65 wrote: “We go into it expecting one thing, but as soon as we manage to bring it to life it starts behaving oddly and there’s only so much we can do to keep it all hanging together.”

Listen to replicr, 2019 by 65daysofstatic on Spotify and Tidal

replicr, 2019 by 65daysofstatic on Amazon

I Am Easy To Find by The National

The National are another band who it had felt were at the top of their game, before they raised it higher in 2019. I Am Easy To Find has a communal feel with its group of guest vocalists; Sharon Van Etten, Lisa Hannigan, Mina Tindle, Gail Ann Dorsey, Kate Stables and the Brooklyn Youth Chorus all appear on the album. Unsurprisingly, it’s another record where Bryan Devendorf’s unorthodox drum patterns and Matt Berninger’s baritone are at the fore, but it’s often the space between the latter and those female vocal accompaniments where the sonic beauty lies.

I Am Easy To Find by The National on Amazon

I Love You. It's A Fever Dream. by The Tallest Man On Earth

Kristian Matsson says the title of this album, which focuses on the hardships and obscurities of a life spent on tour, is a message to his fans; after 2015’s Dark Bird Is Home introduced full band arrangements for the first time in his catalogue, I Love You. It’s A Fever Dream. strips things back to guitar and banjo, the way the oldest of those fans will remember hearing him for the first time. It’s a largely intimate ten-song set of sparkling melodies and intricate finger picking, with its few ornamental lines from a horn, piano or synthesizer introduced only where they make maximum impact.

Listen to I Love You. It's A Fever Dream. by The Tallest Man On Earth on Spotify and Tidal

I Love You. It's A Fever Dream. by The Tallest Man On Earth on Amazon

Thom Yorke has been thinking a lot about dreams: why we have them, their importance, their relation to a wider world seemingly intent on destroying itself. ANIMA is threaded with them, sleepwalking anxiously through its nine exquisite pieces that mark probably the most accomplished piece of work Yorke has completed outside of Radiohead. There are as many synthesized textures as ever for your system to pull apart, and as many fractured rhythms attempting to trip it up. But this is not an exercise in mathematics, but one of dynamics, in drawing the story from vocal lines straining to be acknowledged.

Listen to ANIMA by Thom Yorke on Spotify and Tidal

ANIMA by Thom Yorke on Amazon

The longer we had to wait for FKA twigs’s follow-up to the sensational LP1, the more nervous we grew that it could never feasibly meet our expectations. Five years later, though, and MAGDALENE has allayed our fears. It’s a more vulnerable, refined sound than on her debut, with choral qualities and a sombre intimacy that wraps vine-like around the electronic instruments that are at its core. It’s still inventive, still sometimes idiosyncratic, but it’s actually rather more mature, and more reflective than we’ve heard from her before.

Listen to MAGDALENE by FKA twigs on Spotify and Tidal

MAGDALENE by FKA twigs on Amazon