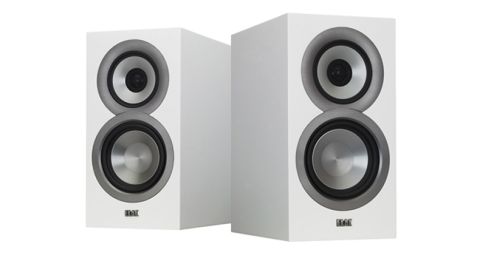 Elac’s trim, designed-for-Europe standmounters promise you and your music collection a good time

Elac’s new speaker range should come with a Slimming World badge to acknowledge the fact they carry a little less weight than most speakers that arrive in our test rooms. The clue is in the name: the Uni-Fi BS U5 Slims are indeed slim speakers.

The new Uni-Fi Slim range, comprising a pair of floorstanders, a centre channel and these Uni-Fi BS U5 Slim standmounters, is the latest brainchild of British speaker designer Andrew Jones.

It’s a narrower (albeit taller and deeper) ‘European-friendly’ version of the brand’s Uni-Fi series.

Though we wish some of the trimming had gone into that mouthful of a name, we can’t argue with the design logic. No wider than the speaker stands we position them on, the Uni-Fi BS U5 Slim’s cabinets are an interior designer’s delight.

They play to the all-white decor fad and are structurally compact, with a smart and sophisticated driver-dominated baffle.

Essentially, Elac has taken its Uni-Fi series and added a sprinkling of elegance (or, as ELAC puts it, "sophisticated European flair") to the design – firstly with their slim proportions, and secondly by swapping out the black brushed-vinyl wrapping for a satin-black or -white finish.

But on the inside, the Slims are the same as their UB5 big brothers, and engineered to have the same sound. While the cabinets are indeed of different proportions, they supposedly both have the same cabinet volume.

These three-way speakers – an unusual configuration in a design of this size and price – employ the same crossover components, as well as the same dual-concentric driver.

This sits above the 13cm aluminium bass driver and essentially merges two drivers into one - the 2.5cm cloth dome tweeter is positioned concentrically within a 10cm aluminium midrange. The desired effect is a more even dispersion of sound, and firmer stereo imaging from wide listening angles.

The intention is actuality, too, the benefits of the concentric driver coming to the fore as we kick off with a live recording of R.E.M’s Perfect Circle.

They stretch their arms bear-hug-wide to deliver a lovely spread of sound, and that big, involving and open soundstage isn’t crushed when you place the Uni-Fis near a wall, either (which we recommend doing, by the way).

They err naturally on the lean side of even, so ideally you’ll place them 10cm or so from a wall to get a more solid foundation, and a helping hand tonally. Toeing them in also firms up the stereo image.

The rival Award-winning Dynaudio Emit M20s may be heartier, more solid and powerful, and their burlier sound makes more of a meal of the track’s introductory crowd applause.

They are also capable of the low-end depth and authority to really put their foot through the anchoring bass guitar line, but beyond that schooling the Elacs have no major flaws.

That concentric driver also ensures satisfying cohesion between the mid- and high frequencies, though below that point the bass seems a little detached from the fold.

Over to Broken Bells’ Leave It Alone, and there’s the dynamic attention to reveal the fluctuating variation in acoustic string plucking, and the insight to earnestly communicate the distorted crooning of James Mercer (of The Shins fame).

Here, the combination of both draws you into one of the simpler, more modest melodies on the band’s album, but the Elacs also have the agility to do justice to the duo’s more upbeat tracks. That's also the case with the headlong jagged synths in The Knife’s Silent Shout. That said, the Dynaudios and Arcaydis EB1S do have a knack for carrying a rhythm track with greater rigour.

The Elacs show that you don’t have to be physically big to pack a punch. Again, despite the bass thump in Kendrick Lamar’s Institutionalized not being able to plumb quite the depths others reach, the authoritative snappiness of the beat riding over it has the ability to make you sit more upright in your seat.

At this price there are plenty of options in the speaker market, with the likes of Dynaudio sitting pretty at the top of the pile with a killer combiination of transparency, precision and authority.

But there’s a lot to be said for a trim, aesthetically pleasing pair of speakers that are open-sounding, fast and agile and, for those victims of circumstance, can play ball near a back wall.

If the word ‘stylish’ ranks highly on your priority list for new speakers, and is somewhere just above or below ‘fun’, the Elac Uni-Fi BS U5 Slims are a good shout indeed.