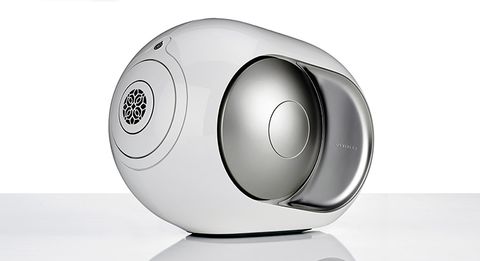 Paon. That’s French for peacock. We aren’t certain they use the term peacocking in France, but, if they do, it could definitely be applied to Devialet.

But when the insides of the Parisian company’s products are so radical, you expect the exterior to be its match.

That has certainly been the case with the innovative hybrid amplifiers we’ve seen – the D-Premier and 110, both awarded five stars, and remains so with their first wireless speakers, the Phantom and Silver Phantom.

The Silver Phantom is identifiable by the silver domes of the side-firing bass drivers. It’s £300 dearer than its partner, but with a whopping internal power of 3000W and capable of outputting sound levels of 105dB (compared to a not inconsiderable 750W and 99dB) – that’s louder than your average motorbike.

Aesthetically, quality of design may be largely subjective, but any product that arouses discussion over what it looks like – vacuum cleaner? severed droid head? plus-sized computer mouse? – has a place in our hearts, if not our homes.

The genius of the Silver Phantom is in its innovative circuitry, the same wedding of a Class A and Class D amplifier working in tandem as pioneered by the D-Premier.

While the former delivers high-quality sound at low power, the Class D provides the muscle. In theory, at least, it is the ideal partnership. Moreover, Devialet’s engineers have managed to shrink it enough to fit inside the Phantom’s 12 litre chassis.

The body itself is grander than a simple plastic moulding, too: the external surface is made of ABS (Acrylonitrile Butadiene Styrene), the internal skin uses glass fibre filled polycarbonate and has an aluminium central core to aid the unit’s rigidity.

At a hefty 11kg, the Phantom is a heavyweight in every respect. But, having lugged it from its box onto a speaker stand, being careful to avoid the fragile side-firing bass drivers or front-facing co-axial unit, you’ll be pleased to know that is the hardest part of the setup. (Devialet’s own stand for the Phantom, named the Branch, will soon be available, along with a carry case, the Cocoon.)

For the rest, unless you want only to connect directly from your phone through Bluetooth, you are guided through by Devialet’s Spark application and a series of ambient electronic noises emitted by the Phantom.

The speaker itself has only one button, for power, so unless you opt for the remote at £129, everything is done within the app. If you want to connect two or more speakers (the limit is 24) you’ll need a Dialog, available for £249, which also gives you access to your streaming services and Internet radio.

Though impressed by the technology, and by the sound emitted by its forbearer amplifiers, that doesn’t necessarily mean Devialet can succeed with a high-end wireless speaker, so we are still impressed when we play Darkside’s Psychic album.

Though we can’t play in stereo, having only one Phantom, the space and depth of Golden Arrow’s atmospheric opening is immediately apparent thanks to some intelligent organisation.

And soon, with the track’s low-end pulse, the Phantom demonstrates the depths to which it can reach with those sizeable bass drivers. Yet still there is breathing space left. Bowed strings are decipherable and believable, closer to an acoustic performance you’d expect from a wireless speaker though, even at this price.

We aren’t playing at anywhere near the Phantom’s capabilities in terms of volume, but our large listening room is still easily filled. The drum beat, when it arrives, thumps you in the chest, but in a way so restrained it at once respects the nuances of the track and tells you it can go a lot harder if it wants.

Later on the record, with Paper Trails, that rhythmic expression is showcased further. The guitars and percussion lay down the most achingly cool polyrhythm, only superseded by the baritone vocal doubled by its bass counterpart – each remaining coherent despite an overloaded low end.

To see how the Phantom reacts to heavier tracks at louder volumes, we release the breaks with Deftones’ My Own Summer (Shove It). That inimitable guitar riff is kicked through by the drum kit like a hoof and doesn’t become muddied by the weight of the bass guitar.

All very impressive, but it’s the handling of those screams and breakouts we like.

It feels like it could blow the doors from our listening room, but with a sense of organisation that separates powerful from just loud. No hi-fi can recreate the sound quality of live performance, but with Devialet, you could happily fool your neighbours into thinking you had the band in your living room.

We tone it down with Owl John’s Songs About Roses. Without touching the volume, the Phantom lets Scott Hutchinson’s delicate guitar playing and vocals sing.

The speaker is assured as the kick and bass guitar drive the song later on, not feeling the need to flex its muscles or prove its worth. It is enthusiastic with the music, but isn’t overzealous and doesn’t force the issue.

We’d just like a little more subtlety and expression – each note is clear, but how it is being played isn’t always so much. It is that layer of musicality at which traditional hi-fi, even at far lesser cost, excels in ways the Phantom can’t. Generally we’d say the two shouldn’t be compared, but, at this cost, to us that level of subtlety matters.

Nonetheless, the speaker is talented and you’re clearly buying into Devialet and not just the Phantom. That means free firmware updates and a chat function on the company website.

See all our Devialet news and reviews

So why isn’t this a five-star product? It is the best sound we’ve heard from a wireless speaker – bolder, bigger and louder than its size would suggest – but compared to the What Hi-Fi? Award-winning Naim Mu-so, we just want more from that extra £800 outlay.

See all our Devialet news and reviews