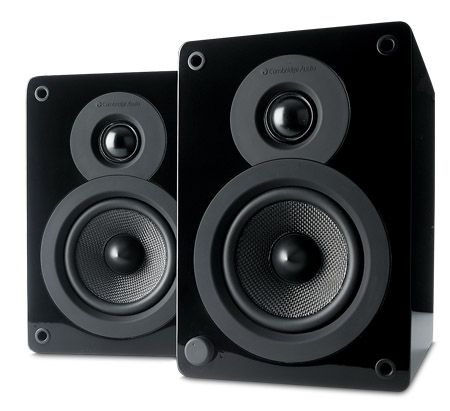 The Cambridge Audio SLA25 gave us high hopes, which were slightly deflated due to a somewhat bland sound

Powered speakers like the Cambridge Audio SLA25 are useful when you’re short on space, or want something with a little more pep than laptop speakers that sound like a bee in a jam-jar.

They work by including the amplifier in the speakers, so you don't need a separate amp: source components connect directly to one of the speakers, as does a mains lead, while conventional cable runs to the second speaker.

That's how powered speakers such as these differ from fully active designs, in which there's a separate amplifier channel for each drive unit, and a crossover network to split up frequencies before the signal hits those amplifiers.

In simpler powered designs such as this, the right-hand speaker houses the electronics, the left is a conventional speaker, and in both cases the crossover sits between the single amplifier channel for each channel and that channel's drive units.

In this case the amplifier delivers 15W per channel, and claims 30W peak output, and there's a built-in digital to analogue converter (DAC) to enable the speakers to take the audio output from a computer, as well as conventional analogue connections.

So as well as the Type B USB socket there are stereo phono and 3.5mm inputs, a connector for an iPod dock, and subwoofer and speaker outputs on the right speaker, while the left channel simply has a pair of speaker inputs. A volume control is also provided, on the front of the right speaker.

The gloss-black finish and solid, weighty build make for a classy first impression, while the look with the grilles off (our preferred method of testing) is pleasingly understated, not least thanks to the 24mm soft-dome tweeter and 10cm mid/bass driver with its woven cone.

Anyway, enough of what’s inside the boxes; what we want to know is what happens when we play some tunes.

Straight from the box, an Apple Lossless file of John Lee Hooker’s This Is Hip played from a MacBook Pro via the stereo line-in sounded controlled and detailed, if a little tight.

However, a weekend of running-in saw things loosen up considerably: the presentation is on the mellow side, with an articulate midrange, decent detail and fair timing, as well as a wide stereo field; but it still sounds a little reined-in to our ears.

Switching to the digital input, to bypass the Mac’s internal DAC in favour of the one in the speakers, gave better results.

The sound opens up, bringing with it more volume, more detail and more in the way of dynamic ability. But here’s the catch: whatever the source, we just couldn’t help feeling that the presentation was just a bit laid-back.

There’s nothing wrong with that, but it didn’t make the hairs on the back of our neck stand up. If the Epoz Aktimate Micros are like razzing a Ducati around Monza, the SLA25s are more like taking the Zafira to Hastings…

So, four stars it is. These powered Cambridge Audio speakers are serviceable, competent, detailed and never tiring to listen to – but if it’s excitement you crave, then you can do better.