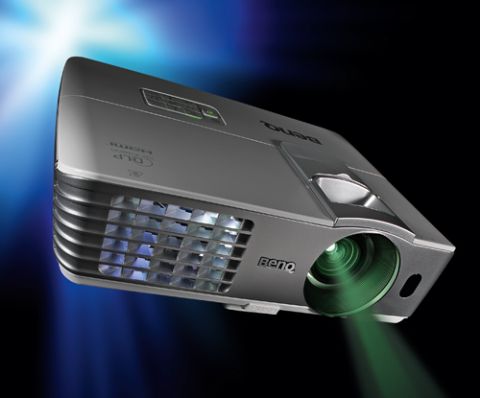 The sharp and clear picture impresses, but lack of subtlety in dark scenes and motion issues hamper this budget offering

The successor to the 1060, and newest offering from BenQ, is the W1070. This 3D, Full HD, DLP projector continues the budget line with a price tag of around £760. It’s as compact as ever, and the white chassis now sports a new square-edged design compared with the curved edges of its predecessor.

Setting up projectors always takes some time and care, and this BenQ is no different: adjusting the picture/screen/image to get it perfectly square takes a good few minutes; the front height adjustment isn’t particularly refined, while there is just one adjustment screw on the back left – which does allow finer adjustments to the angle of the screen.

Once all that’s set up, though, adjusting the focus and zoom manually is a breeze.

With a short throw ratio of 1.15 – 1.5 (ideal for small rooms, personal home theatres or even in the classroom/office – since you can get a larger picture in a shorter distance) you’re likely to place it in front of you (or ceiling mount it), rather than placed at the back of the room (like in large spaces such as cinemas.)

Delve into the menus and there’s scope to make finer adjustments to the picture settings; we’d highly recommend using a THX Optimizer disc to set up your picture correctly.

One thing to note is that colour and tint settings aren’t accessible in the W1070 if you’re using an HDMI source – rather curious, considering the two HDMI inputs on board invite you to connect Blu-ray players or AV receivers via HDMI.

A small, standard remote control is supplied with the W1070, with easy access to brightness and contrast settings should you need them mid-film. Sadly, there’s no backlight on the remote, so you do have to fumble a bit when using it in a dark room.

The W1070 also has built-in 10W speakers: they’re no substitute for a full 5.1 surround system, but they’re quite nice to have if you’re using the projector for gaming, presentations or casual viewing that doesn’t require much attention to sound.

Play the Blu-ray of 2009’s Star Trek – one of our test favourites – and the scenes inside the USS Enterprise look clear, bright, and full of sharp detail. It’s an exciting picture with a robust colour palette with particularly punchy whites that can look a bit overdone and glaring at times – adjusting the contrast levels tone this down to a certain degree.

It’s an impressive picture at first glance. Switch to darker scenes, and while the deep blacks look satisfying, they’re not forthcoming with a great deal of detail. Shadow definition lacks subtlety; in some scenes, low-level detail is swallowed up so much that you’re left with patches of black that look more like silhouettes.

Projecting the DVD of The Lord of the Rings: The Two Towers, it’s clear the W1070 is much happier with brighter, outdoor scenes than dark, murky scenes.

It’s with motion that the W1070 falters, juddering across fast-moving scenes and sweeping pans. 3D isn’t ideal either: the BenQ active 3D glasses (not included; sold separately for £79, while other DLP-compatible brands can be used) are cumbersome and heavy, and the image isn’t as clear or comfortable in 3D as we’d like.

Compared with some of its previous efforts, BenQ doesn’t quite hit the mark with the W1070; it’s an enthusiastic and glossy picture, but the W1070 is outperformed by some price rivals.