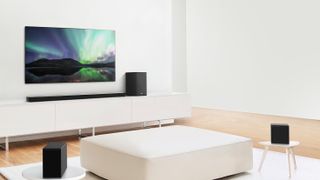 LG's standout 4K OLED TVs have been amongst the best TVs on the market for some time, but its soundbars (including Dolby Atmos models) seem to have flown under the radar. So what are they like? And should you consider buying one?

The Korean giant's soundbars have garnered a mixed reception so far. But if "an uncommonly affordable Dolby Atmos soundbar" piques your interest – and it should do, it was a phrase uttered by us upon reviewing an LG 'bar – then why not take a closer look?

LG's new soundbar range for 2020 has just been unveiled. The five-strong product line features some of the best in immersive, three-dimensional hi-res audio tech, such as Dolby Atmos, Meridian Audio and DTS:X, plus – for the first time – AI Sound Pro auto-calibration.

As a key player in home cinema, LG has something to prove in the realm of best soundbars. It may not have achieved the hit rate of Sonos or Yamaha yet, but LG has clearly put a lot of effort into honing its new range – which will doubtless mean a plethora of deals on its earlier ranges.

But are LG soundbars any good? And should you consider an LG soundbar deal if you spot a bargain? We'll provide all the expert advice you need to make a sound(bar) decision.

We reviewed LG's cheapest Dolby Atmos soundbar of 2019, the LG SL8YG (the "uncommonly affordable" model) and we were impressed with what we heard in terms of Dolby Atmos presentation. It does a good job of spreading soundtracks far and wide (and, to a lesser extent, above) and could be a possible solution if introducing multiple speakers to the lounge is a hard no.

Google Chromecast integration means you can ‘cast’ music and video content from compatible apps (such as Spotify, Tidal, Netflix and Amazon Prime Video) straight to the LG, and it's handy for grouping other Chromecast-enabled speakers together for multi-room playback. Built-in Google Assistant is on board too.

It proved a solid three-star soundbar when we considered the sound quality for bass softness and dynamic expression, but its attractive build and Dolby Atmos support remains a good advert for the format and sets a decent precedent for the 2020 rollout.

While the LG SL9YG didn't exactly receive a glowing review, the impressive sense of Dolby Atmos height featured again, as did the premium feel, and we also heard floor-shaking bass. The sound was middling, but the product showed immense promise if LG could achieve a better integrated, more dynamic and solid sound.

On paper, LG's 2020 soundbar spec-sheet looks impressive. The five-strong range has been released in the US, with all models bearing the prefix 'SN' followed by a number, then either 'RG' (LG's top of the range model) 'YG' or 'Y' suffixes – and all boast AI Sound Pro for the first time.

This addition to the feature list is essentially auto-calibration tech, meaning compatible soundbars will analyse your room and adjust their sound to suit the space available.

The flagship LG SN11RG (pictured, above) is a 770W, 7.1.4 hi-res audio (24-bit/192kHz) set-up that comes complete with two wireless rear speakers, both of which are forward and up-firing.

Google Assistant is here again too, and it's priced at $1700. Prices for the UK, Australia and the rest of the world are not yet known, but we'll update this information here as soon as we have it.

The LG SN10YG is a 5.1.2 channel option, also with Dolby Atmos, DTS:X and built-in Google Assistant, plus 4K and Dolby Vision video passthrough. It is available now, priced $1300 .

With the SN10YG (above) and the three other, lower-priced new soundbar offerings, you could, of course, add full surround-sound via LG's optional SPK8 Wireless Rear Speaker Kit, sold separately.

Boasting a similar spec-sheet (albeit in a 3.1.2 channel set-up) the LG SN8YG is a compact design and simple set-up for slightly smaller rooms and TVs from 49in and upwards. Dolby Atmos, DTS:X, AI Sound Pro and Meridian Audio's Advanced Technologies are all still on the menu, as is built-in Google Assistant. It is priced at $800.

Into LG's more budget-friendly options for 2020, the LG SN6Y is a 3.1 channel set-up with DTS Virtual:X, (note the 'Virtual') and a dedicated centre channel. There's no Dolby Atmos support or Google Assistant built-in, but you do get Bluetooth, optical and HDMI ARC connectivity, and LG even knocked $50 off the asking price in its Home Entertainment Savings sale recently, making it a snip at $350.

At the most affordable end of the scale, the LG SN5Y (below) is a 2.1 channel hi-res audio set-up with DTS Virtual:X. AI Sound Pro still adjusts sound levels to what you're watching, there's Bluetooth support, and LG says it best suits TVs of between 40in and 49in. It saw a similar $50 price cut in LG's sale, too, making it an easy upgrade for $230 if you live in the US – but for a limited time only.

For 2020, the flagship SN11RG offering is LG's most impressive-looking proposition, although it does also have the biggest price tag. At the other end of the scale, however, LG has already included its two most budget-friendly 2020 soundbars in a recent sales promotion, proving there are bargains to be had, even on brand new releases.

While we've yet to test a class of 2020 LG soundbar, if LG has capitalised on the immersive Dolby Atmos chops seen in previous iterations and fine-tuned the sound quality, it could be on to a winner this year.

We wouldn't turn our noses up at a tempting LG soundbar deal, should one present itself. Check for feature support on cheaper and smaller models, as things such as DTS:X and built-in Google Assistant aren't a given at that end of the scale, but there's a fair chance they will still offer good value.

While the 2020 range has yet to grace our testing facility, these are particularly tempting on paper due to the inclusion of AI Sound Pro auto-calibration tech for the first time. The 2019 models are bound to be reduced, too, so if virtual surround-sound on a tight budget is top of your list, keep an eye out for deals.

For the ultimate sonic enhancement of your TV's sound, we'd suggest checking out our buying guide to the best soundbars, which is full of worthy alternatives for you to consider. Top of the pile for an easy upgrade on your TV's speakers has to be the Sonos Beam – a What Hi-Fi? Awards 2019 winner, or the Yamaha YAS-207, which also took home a trophy at our 2019 awards ceremony.

Veering towards a 5.1 home cinema speaker package rather than a soundbar? The Q Acoustics 3010i 5.1 Cinema Pack got our nod for the best speaker package from £500-£1000 at the What Hi-Fi? Awards 2019. A quick scan of the current deals online suggests you could nab it for bang on in the middle of those two figures rather than at the top end, too. A few options to consider...

Read all our LG reviews