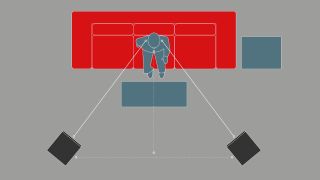 There are few things more galling than seeing a pair of stereo speakers huddled together on a bookshelf, crowded by trinkets and electronics, under appreciated and talents wasted.

While we'd hope that nobody reading this page is quite in that situation, it isn't always obvious what you should do in order to get the best possible sound from your speakers – no matter whether they're brand new or you've had them for a while.

It's a lot to do with experimentation, and all speaker manufacturers will have suggestions to guide you with their own designs, but there are some simple steps that will set you on the right path to audio enlightenment.

While we can't hold your hand through the set up and positioning of your specific speakers in your specific surroundings, if you're ignoring any of these fundamentals then you're sure to struggle.

Let the speakers run in

It’s extremely important for speakers to be properly run in before you judge them, so don’t subject them to an extended testing session as soon as you’ve lifted them from their box and linked them to the rest of your system.

All this really means is you leave them playing, allowing the components to warm up, stretch out and get into their stride. Some speakers can take almost 100 hours to come on song – and they can keep improving long after that – though for most around 24 hours should suffice.

It’s unlikely you’d want to do this at any extreme volume anyway, but be careful not to push them too hard straight away. Let them ease into a walk before you ask them to run.

Get the positioning right

If we accept that you’re not really doing anything but plugging them in and waiting during task one, the most time you’ll spend getting your system to sound right will be with positioning.

Take your time here. Small differences in position can make big differences to the sonic balance. Placing your speakers close to the back wall will give you more bass, while putting them further away will decrease the low end you hear but should offer more convincing stereo imaging.

This should be a balance, rather than a compromise, though rear-ported speakers – that is to say those that have a reflex port firing backwards – tend to be more sensitive to proximity to a rear wall.

Do try to avoid placing your speakers in a corner. It may be convenient spatially, but you’ll almost certainly get fat, lumpy bass that will skew the whole balance of the sound.

Imaging is also largely affected by the angle of the speakers. Most speakers sound best toed-in towards your most regular listening position, which ought also to be equidistant to each speaker for peak sound dispersion.

Some manufacturers do design their products to fire straight ahead, so it’s best to check the manual for information and suggestions on that. The manual may also suggest how far apart to space your speakers and the recommended distance from each surrounding wall. Ultimately, though, it is up to you to adjust and tweak to get the best out of your room.

You might have bought something advertised as ‘bookshelf’ but, as with their surrounding environment, the support on which your speakers sit is of vital importance. We suggest you buy some quality stands.

The performance of a standmount speaker depends hugely on the quality of its support, and this is another area where you shouldn’t compromise. There are companies dedicated to designing Award-winning stands and hi-fi support, but speaker manufacturers sometimes also create supports tailored to their ranges, so it’s worth also spending time to research and listen to an array of options.

Likewise, if you’ve opted for floorstanding speakers, make sure you fit the spikes; if you have wooden floors you’ll likely have been supplied with coin-shaped pieces to put the spikes on to avoid scratching the boards. If you don’t have any of those, you can always use actual coins or something similar.

Even if that seems painfully apparent to you, there’s a chance you’ve not considered speaker cables.

Some people ignore the significance of good-quality wiring altogether, or are tempted to skimp on the last few quid. Please don’t. Trust us when we say a good speaker cable can be the best-value way to upgrade your audio experience.

Again, different cables can accentuate different qualities in your hi-fi system, so it’s well worth trying a few well-reviewed cables before buying metres and metres of the wrong one.

It might seem pretty obvious but, assuming you have a decent pair of speakers, you won’t want to be leaving anything sitting on top of them that might rattle or dampen the sound when you put your music on.

You also don't want anything sitting directly in front of the drivers – and usually that includes the speaker grilles. While it's a good idea to keep them on for protection when you aren't using your speakers, and to keep the drivers from collecting dust and dirt, you'll often get a better sound with them off.

Certain manufacturers tune their speakers with the grilles on, but most of the time the grilles are simply designed to be as unobtrusive as possible – which by definition is still somewhat obtrusive to the drivers' output. Just make sure to give them a delicate dust every now and then to keep the drivers clean.

After that, the best way you can look after your speakers is really to feed them lots and lots of music. The more love you give them, the more they'll give back. Never be afraid to shuffle your speakers around a bit if it helps, either – speaker set-up is as much about listening as any set of rules.

And remember, the whole reason you're doing all this is for your enjoyment. So never lose sight of why you bought your speakers in the first place.