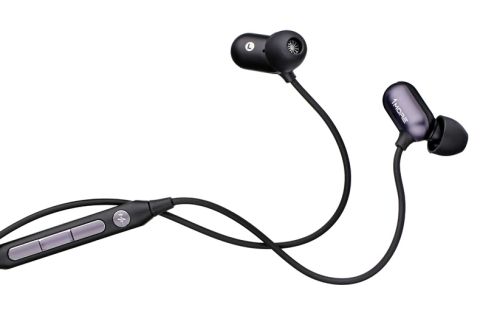 A distinctive-looking pair of earphones, but too much treble means they have an unnatural delivery

Ready for just one more headphone review? Bad puns out of the way, the 1more C1002s are interesting because they come from a company we’re not too familiar with.

But that isn’t the only way the 1more C1002 distinguish themselves. They look rather unusual too.

The C1002 structure is like an earphone aperture glued into a giant medicine pill. Their earpieces are a bit bulbous. It’s designed to fill the backside of your ear cartilage but makes the 1more C1002s an unusual fit.

As with most earphones, pick the right tip and you’ll be fine.

Owing to the unusual earpieces, 1more includes rubbery sheaths for the C1002’s bodies as well as normal rubber tips.

Whether they’re useful or not will depend largely on the shape of your ears, but may help you get a better ear canal-hugging fit and/or improve comfort if the shells end up irritating you ear cartilage. We got on fine without them.

1more calls the shape a ‘capsule’, and it’s home to the C1002’s dual drivers. There’s one balanced armature and one dynamic driver working in tandem.

The capsule part is part aluminium, part plastic, and finished in a bronze-brown shade that sensibly doesn’t draw further attention. Their shape alone does that.

Aside from the dual-driver style and look, the 1more C1002 are fairly conventional earphones. They have a three-button in-line remote designed for iPhones and Androids, and the cable splits off in a Y shape.

There’s no active noise cancellation or wireless but the two earpieces cling together when not in use thanks to little magnets on the back of each capsule.

The idea is you can make them cling together around your neck so they don’t jangle about quite so much.

1more’s big claim is that the C1002’s sound was given a final tuning by Luca Bignardi. Don’t worry if you haven’t heard of him.

He was part of a team of engineers who worked on a “Best Engineered” album of the 2001 Latin Grammys: not exactly Heat magazine fodder.

We’re not entirely convinced by the sound, though. The treble is very pronounced, unbalancing the sound much in the way some overly bassy headphones do.

Lots of people like bright headphones, but the extent of the emphasis is incongruous.

While the treble clarity is obvious and doesn’t suffer from obvious sibilance or outright harshness, it’s also not refined or well-integrated enough to work as a “statement” sound signature. Burning the pair in didn’t tame the effect either.

Roll back the treble and there are some admirable aspects here. The bass is fairly punchy, if lacking a little sub-bass power, and the mids are clear. However, they come across as trying a little too hard to relay treble clarity.

The 1more C1002s are unusual in-ears, given a sporty flavour thanks to their magnetic earpieces. Their shape and fit is odd too, with silicone sheaths supplied as well as the standard array of tips.

A dual driver earphone for under £90 seems like a good deal too. However, the treble is too enthusiastic, making the C1002s sound less balanced and natural than they should.