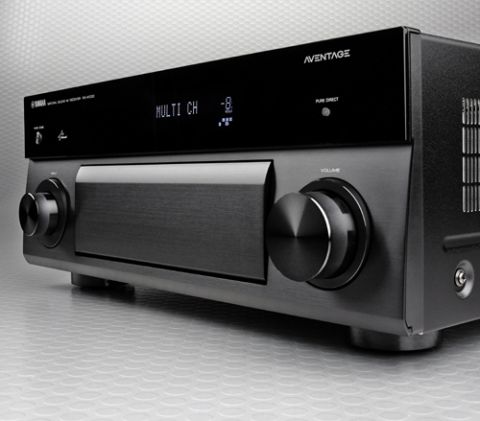 An enjoyable amplifier that delivers big-time on power and muscle

Yamaha’s Aventage range of AV receiver is known for its powerful, punchy and thrilling sound, and the Yamaha RX-A1030 fits that sonic bill in a £1000 package.

This seven-channel amplifier has a host of features at its disposal, including AirPlay, MHL connectivity (for connecting smart devices via HDMI), 4K support and multiple HDMI connections, Yamaha shows it’s still one of the top contenders when it comes to surround sound with the RX-A1030.

Surround-sound steering is this amplifier’s raison d’être. It has the power and precision to effortlessly drive a film’s sound effects across the room: Skyfall’s DTS-HD Master Audio 5.1 soundtrack is handled brilliantly, with accurately placed crashes and gunshots hitting their mark in a punchy, detailed soundfield.

The A1030 has a deep, punchy bass that stands out from the rest of the frequencies. Skyfall’s motorbikes rev satisfyingly loudly, aggressively and rumblingly.

There’s plenty of energy and impact, although the bass falls on the chubby side compared with the subtler and more refined low-frequency extension of the rival Pioneer SC-LX57. It’s agile and rhythmic, but could be tauter. However, that meaty, powerful bass is lovely to listen to.

At the other end of the frequency spectrum, the Yamaha continues to impress. It’s a smoother treble delivery than the sharp Denon AVR-X4000, rounding off the highs just a little. We’d rather listen to the Yamaha’s warm and energetic performance than the Denon’s harder and somewhat restricted approach.

Unlike the range-topping Yamaha RX-A3030 (which bagged a 2013 Best Buy Award), the RX-A1030 doesn’t have that big, cinematic sense of scale that we’ve come to expect from a Yamaha.

The Pioneer SC-LX57 offers more space and dynamic reach in a wider soundfield. In comparison, the RX-A1030 can sound a little closed-in and busy with its brawny sound effects.

Switch to music and the Yamaha bounds along with endless energy and confidence, albeit without the Pioneer’s outright subtlety. Although it’s a generally smooth presentation overall, the RX-A1030 favours impact over refinement.

As a result, Beyoncé’s If I Were A Boy struggles to stay under control, with every musical element vying for attention, and losing a lot of rhythmic cohesion in the process.

The Yamaha RX-A1030 boasts plenty of connections, starting with eight HDMI inputs, and two HDMI outputs. They all support Full HD, 3D and Ultra HD/4K, as well as Audio Return Channel when connected to a TV.

You can connect the receiver to your home network using an ethernet connection, which will let you browse the vTuner and Napster libraries, and you can also stream files from your laptop or NAS device over DLNA.

Apple users can plug their iPod, iPhone or iPad into the front-panel USB socket (which also charges the device), while Android devices can use the MHL (Mobile High-definition Link) input to stream HD content.

AirPlay streaming is also available, but you’ll have to pay extra for Bluetooth (£80) and wireless (£50) adapters. Most popular file-formats are supported, as well as 24-bit/192kHz FLAC and WAV files via USB.

While home cinema amplifiers are getting better year by year with stereo music, we’d still urge you to invest in a dedicated stereo amplifier for serious listening.

The impending Spotify Connect feature – which will stream your playlists directly from the receiver, freeing your smartphone up for other uses – is due in November. A firmware update, a Spotify Premium subscription and a network connection is all you’ll need for that extra streaming feature.

Build and set up

The amp itself is a hefty, solidly built aluminium chassis, available in black and titanium finishes. The front panel is neat and sleek, with various control options and inputs (such as the USB and MHL ports) hidden away under the aluminium flap. The display is crisp and easy to read from a distance, too.

Yamaha’s auto-calibration system optimises the sound according to your speaker package and room acoustics. It doesn’t take too long, and is largely accurate. The only blip is that it registered our centre-channel speaker as ‘small’.

We assure you it’s not. Also, once the set up is complete, make sure you set the Parametric EQ to ‘Through’ (and not Flat) for the purest sound.

We really like Yamaha’s AV Controller app. It’s free to download for Apple and Android devices, and its simple layout makes a lot more sense than the now-dated on-screen interface of the amp itself.

Yamaha assures us that a design overhaul is on its way, but for now, using the interface of your smartphone or tablet feels more swift and intuitive. Selecting inputs and playing around with Yamaha’s numerous sound-processing modes is easily done, as is controlling playback of streamed music.

We feel a bit more comfortable using the standard remote control when only changing the volume, but we like having the app at our fingertips.

We have our niggles with this Yamaha AV receiver, but there’s no denying the power and impact it has when driving explosive-filled Blu-ray films. This is an action-packed amplifier, and its meaty bass and solid sound will win over many users.

However, it’s not quite as subtle, precise and dynamic as some rivals. A bit more control and refinement over its exuberant delivery would have raised the stakes considerably. But if its raw surround sound power you’re after, the RX-A1030 is a worthy audition at this price.