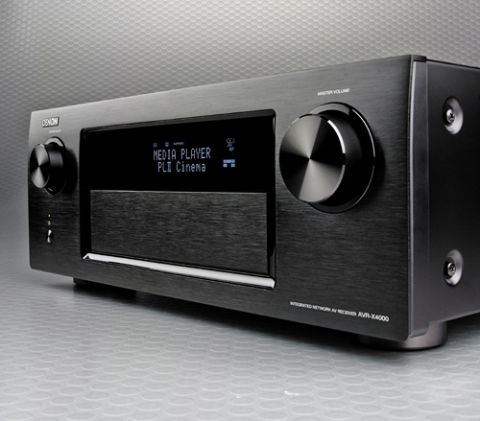 A decent amplifier for the price, but needs more subtlety, power and dynamics to truly compete with class leaders

The Denon AVR-X4000 started life costing £1200, then had its price lowered to just £900. And that makes it a decent proposition for your living room.

Its sparkling clear sound and crisp edges make it an arresting listen, but it’s not without its faults.

The Denon AVR-X4000 blisters through a film soundtrack with remarkable clarity. The amplifier focuses on the midrange and treble to a great degree, giving the sound a crisp and rather sharp edge. While it’s a brisk, lively presentation, it’s not quite authoritative enough in the lower frequencies to deliver a fully engaging performance.

Harry Potter and The Order of the Phoenix is as heavy on dialogue as it is on special effects, and the Denon’s focus works brilliantly to deliver expressive voices throughout the Blu-ray.

That clear treble really does hold your attention. The Weasley twins’ magical fireworks fizz and spark and whistle across the Great Hall with plenty of impact.

Surround effects are delivered with speed, if not with as much power and punch as some rivals, nor with the dynamic subtleties of, say, the Pioneer SC-LX57. Dynamically, the Denon sounds a little restricted in comparison.

It might not dip and soar as elegantly as the Pioneer, but it does deliver silences rather well. The soundfield isn’t the most expansive, though, and it needs more air at the top end too.

The Denon’s performance keeps us at the edge of our seat – but it’s a little too on edge at times. We think it could be better at rendering the different sonic textures of instruments and sound. Too often these feel homogenized.

The same holds true when you play a music Blu-ray, such as Beyoncé’s I am… Yours live performance. Here the performance is detailed and agile. There’s a decent amount of attack too, although the X4000’s sound isn’t as spacious as its main rivals. It doesn’t quite have their rhythmic precision, either.

It’s a sharp, fast and attacking performance, but can feel somewhat detached in its relentless delivery. A touch more subtlety, warmth and a weightier foundation would be appreciated.

The Denon AVR-X4000 is up to date with the latest tech and streaming features expected of its class. Pass-through and upscaling of Ultra HD 4K footage is supported alongside Full HD and 3D across its seven HDMI inputs. There are three HDMI outputs, too, but the third is for multi-room purposes only.

It’s a seven-channel amplifier, with the processing capacity to add front-height or front-width speakers. Alongside two optical and coaxial inputs and two subwoofer outputs, there are multiple composite, component and analogue connections.

While we’d still steer you towards a dedicated stereo amplifier if you’re planning to play a lot of music, the Denon AVR-X4000’s extensive streaming features are always welcome.

The ethernet connection gives you various networking features, such as access to vTuner, Last.fm and Spotify music services. The AVR-X4000 is DLNA 1.5-certified, so you can stream any music stored on a laptop or NAS device over your home network.

Those with Apple devices can either stream music via AirPlay or simply plug into the front USB port, which will also charge your device. The X4000 also supports high-resolution audio FLAC and WAV files up to 24-bit/192kHz.

Build and set up

The Denon AVR-X4000 is a solid, sturdy unit, with a smattering of inputs and buttons neatly hidden away under the front panel door. The amp is available in black or silver aluminium finishes, with a front panel display that’s easy to read.

It’s quick and easy to set up using the automatic Audyssey calibration system, which carries out measurements to optimise the receiver’s sound according to the rest of your home cinema kit and room.

We found that the distances and levels were measured correctly, although it did register our rather large speaker package as ‘small’. A quick check of the speaker settings is recommended, as well as giving the brand new amplifier a few days to run in before you start using it in earnest.

The supplied remote control is a standard button-laden handset, and using it to navigate through Spotify playlists, the simple menu system and change volume is easy enough. You can carry out the same functions on the free Denon Remote App for iOS and Android.

It’s a simple but neat design, although scrolling through Spotify playlists can be jerky and slow at times. Switching between inputs and streaming features is easier to do via the app, but we still prefer using the standard remote for volume control.

There’s plenty to sing about with this Denon AV receiver, but we’d like to have heard more power and punch alongside crystal clear edges.

Denon has been handing out price-cuts to plenty of its products, including the more budget Denon AVR-X2000, which we recently reviewed to five-star success. The X4000’s main rival is the Award-winning Pioneer SC-LX57 (£1200).

And if the Denon was still at its original price, it might have come off a bit worse for wear in comparison. However, the price cut has definitely worked in its favour, and the AVR-X4000 is a decent deal if you’re on the hunt for a sub-£1000 AV receiver.