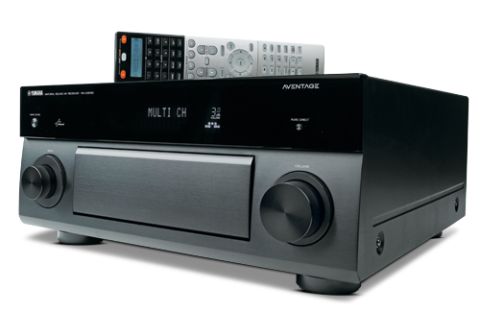 Yamaha’s had great success this year at the £500 level thanks to its Award-winning RX-V673, but now we’re moving up a couple of notches to the company’s high-end Aventage range.

Build quality on the Yamaha RX-A3020 is a cut above Yamaha’s entry-level amps and extra attention has been paid to the unit’s construction. Peer under the chassis of the RX-A3020 and you’ll find not four, but five feet.

The specification of this nine-channel amp is as thorough as we could want at this price. Seven HDMI inputs adorn the back of the unit with an eighth hidden behind the amp’s front panel.

These will cope with all the high-def kit you can throw their way, while the twin HDMI outputs can fire out pictures to two different displays, or you can send 1080p video and high-def audio to an independent second zone. There are even two subwoofer outputs.

Besides video upconversion and upscaling all they way up to 1080p, the Yamaha goes even further, offering Ultra HD upscaling should you be lucky enough to own a compatible Ultra HD display.

Even if you don’t have this particular luxury – and unless your surname is Abramovich, we’re betting you don’t – its standard upscaling is good by the standards we’ve come to expect at this price.

You can alter picture settings for each input and save them in the amp’s numerous ‘Scene’ presets. These help you switch to the right input, video and sound settings at the press of a button.

New for this Aventage range is AirPlay functionality for iTunes or iOS-equipped devices. A USB output on the front still lets you charge your Apple device and stream from it even when the amp’s in standby. Android users are catered for too, with MusicPlay, which offers similar wireless music streaming benefits.

The remote control is usual Yamaha fare, with a mixture of chunky and petite buttons. It’s easier to get to grips with than the remotes supplied with cheaper surround receivers, but you’d expect that at this money.

Alternatively, Yamaha’s AV Controller app for Android and iOS devices gives you the option to control through a smartphone or tablet.

There’s also a new-look mic (above) to go with Yamaha’ YPAO speaker calibration system. Both software and microphone have been tweaked to be more accurate when setting up the amp for different environments, including rooms with different types of furnishings. The actual system itself is still quick, painless and – more importantly – the measurements are accurate.

The other side to the Yamaha’s character is its huge sense of scale. It has no trouble owning the room. During The Dark Knight Rises, each explosion hits forcefully, with sofa-shaking dynamics.

The Yamaha’s deft processing does a great job of flinging debris across and between different channels. Super-villain Bane’s disturbing vocal tone and equally disturbing dialogue sounds expressive and clear, and the amp also communicates the orchestral soundtrack with ease and effortless ability.

And this skill crosses over well from multichannel sound to stereo performance. Like many products of its type, the RX-A3020 still has a fair way to go before we’d take it over a dedicated stereo amplifier, but it times well enough with Michael Jackson’s Beat It as it does in multichannel mode, and the amp picks out a decent amount of detail.

You also get Yamaha’s typical raft of processing modes to choose from depending on what you’re watching or the effect you desire, but we found the best results for music and movies by listening with the amp’s Pure Direct mode engaged. This bypasses all unnecessary processing and the result is a clearer sound.

Yamaha’s Aventage range looks and sounds better than ever. We hope the other models in this range follow suit.